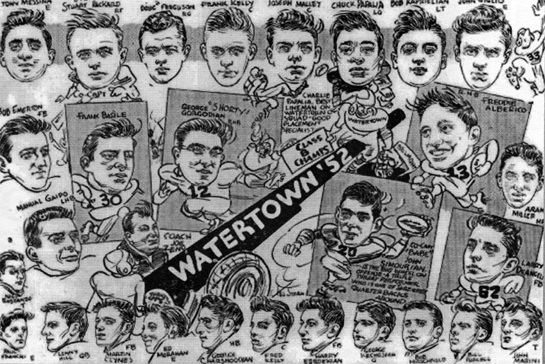 They say a journey of a thousand miles begins with a single step. For the championship season of the 1952 football team, that single step was taken three years previous, when Coach Joe Zeno walked through the door of Watertown High School.

Bob Kaprielian, chair of the Hall’s Board of Directors and tackle on the’52 team, sums up Zeno’s impact, “I think I can speak for all the people who played for Joe during his coaching years when I say: We didn’t always know who was going to win the game. But we always knew who had the better coach. And he was on our side of the field.”

He certainly was. The tough teams of the 1940’s were to be molded into the championship teams of the 1950’s. And the die was cast immediately in 1949, the Raiders went 8-1. Many classic games have been played at Victory Fieid, but one of the most exciting took place that fail, when undefeated Watertown took on undefeated Arlington. The winner would take the state title, Arlington in Class A or the Raiders in Class B. Town pride swelled- more than 10,000 people crowded into the Victory bleachers. And while Arlington won the day, the “Zenomen” made their point loud and clear: football was back at Watertown High.

In taking the team to the next level, Zeno had some pretty rugged raw material with which to work. On the opening day of practice, for each of his five years at WHS, between 150 and 180 candidates would show up; for a sophomore to get even a practice uniform was a major accomplishment. Zeno was able to pick the best of the best; in an era marked by an abundance of talented backs, he must have regretted at times having just one ball. Calling the alphabetical roll shows that everyone on the team had the ability to contribute and, game after game, they did.

Indeed, by 1952 Zeno was having trouble finding Class B teams willing to put the Raiders on their schedule. Seven teams begged off the Watertown slate in Zeno’s first four years. Zeno, no doubt with his tongue in cheek, said he couldn’t understand why. Pointing out that WHS had no Junior High feeder program, nor any spring football, he exclaimed, “you can see that we have to overcome a few handicaps! ”

In any case, by 1953, the bulk of the schedule was made up of squads from much larger Class A schools. Just two Class B teams – Winchester and Belmont – would play Watertown. And the Raiders showed why, beating the two by a combined score of 77-0. Winchester was the defending Class B champ, but behind Simourian’s passing, Morahan’s soft hands, and Tony Messina’s defensive play, the Raiders piled on thirty-three unanswered points. The season-capping 44-0 thrashing of Belmont on Thanksgiving Day remains the largest margin of victory in that storied series.

In between, came everything Class A could throw at Victory Field. Yet, the Watertown line was not scored upon from the line of scrimmage, except in one game. Previously undefeated Nevuton, for example, was held to minus seven yards on the ground by the outstanding teamwork of Packard, Emerton, Ferguson, Papalia, Giglio, and Malley. Against Malden Cathofic, Manny Gaipo picked off two key passes to set up long touchdowns from Len Hill, while Gorgodian, Alberico, Basile, and DeAngelis split the ball-carrying duties; final score, WHS 32, MC 7.

Overall the Raiders ran up 187 points to their opponents’ 55 losing only to a powerful Brookline eleven. Simourian (“the big wheel on offense”), Gaipo (“as good in the defensive secondary as anyone in the state”), and Papalia (“as good a lineman as any I have had at Watertown”) were named to the All-Suburban League team. Zeno was coach of the year with its Thanksgiving Day romp, it was official: Watertown had brought home the championship.

The underclassmen of 1952 would lead the Raiders to another championship in 1953. In those five short years, then, Joe Zeno had truly brought Watertown High on a long and exhilarating journey. The impact of those years still echoes loudly in WHS football history.

But they echo, too, in a more persona! Set of histories, in the shaping of young men, not just into players, but people. Simourian, in his own Hall induction remarks some years ago, recalled Zeno as, “next to my father the most important influence in my life.” Through his caring leadership, Joe Zeno shaped many Watertown boys into the men they would become; and through their lives, he lives still.

Tonight, many of those Zenomen are still standing here. They are still a team; they are still champions. The Hall is proud to pay tribute to Coach Joe Zeno and the members of the 1952 State champions.