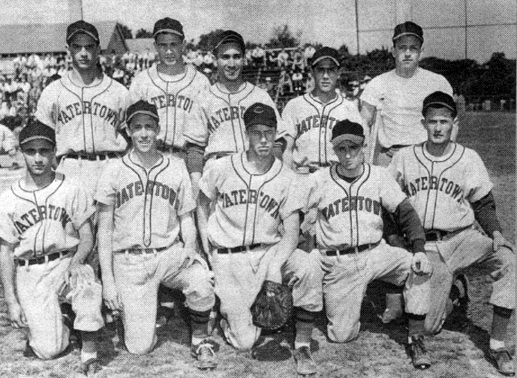 It probably has to be conceded that the 1939 baseball team was the best in Watertown High’s diamond history. But to finish a close second to greatness is to achieve it yourself, and the 1950 team can claim just that. Consider the team’s overall record of 16-3, its Suburban League championship and playoff run. Consider that of the nine starters on the 50 squad, three went on to sign major league contracts. And then indeed, consider the call of the roll: Shannon, Renzi, Stackpole (indeed, two Stackpoles), Barry, Charhoodian, Lopez, Fitzpatrick, Godefroy Burns, Goggin, McElroy Sabino, Horan, Zona.

Coming into Coach Jim Ryan’s second season, the team had a fine nucleus around which to build. The Raiders were the team to beat in the Suburban League and not many beat them. Reflecting the popularity and success of the program, the stands at Victory Field had been expanded that year to hold 6000, changing the configuration of right field and helping the home outfielders. Starting with a 9-8 win over Woburn, the Raiders ran off six straight to open the season. They lost only twice in the regular season, both times to Newton, tight games of 5-4 and 3-0. And as the season wound down they found themselves tied with those same Newton neighbors in a dead heat for the top of the league standings. A playoff game at Boston College followed, and the hungry Raiders got their revenge when it counted, dispatching Newton 9-3 behind excellent pitching from Joe Barry and a three-run homer from Don Sabino. It was Watertown’s first playoff berth since 1939.

The team had a solid pitching staff, with Barry the go-to guy, ably backed by McElroy, Burns, Lopez, Godefroy and Horan. But the team was also strong up the middle defensively. And, as one Boston reporter understated, the Raiders were a “strong hitting club.” Shannon came off a .400+ junior year to hit .528 in 1950, with 22 RBI in 8 league games despite breaking his ankle a week before the season ended. Phil Renzi added power in the outfield and Phil Stackpole was the best backstop in the league. All three would later sign major league contracts.

In the playoffs, the Raiders first faced Weymouth. After spotting their opponents three runs in the second, Watertown bounced back with six in the third. Singles by Charhoodian Renzi, Fitzpatrick, and Horan were followed by walks to Zona and McElroy then, as the paper noted rather breathlessly, “a smacking double by Phil Stackpole ruined Weymouth’s afternoon.”

At least Weymouth was in good company. While the Raiders would fall in their next game to powerhouse Somerville, they had already proved they belonged with the best. They were strong in all aspects of the game; and they had one of the best coaches in the game in Jim Ryan, ably assisted by yet another Hall of Famer then-JV coach George Yankowski. Indeed, this May the first base dugout at Victory Field will be dedicated in honor of Ryan and Joe Dwyer another longtime WHS baseball fixture. The Hall is happy to add Ryan’s greatest team to the facade of Victory Field, to the “Wall of Fame,” in happy tribute across fifty summers and more to what his boys of summer achieved in 1950.