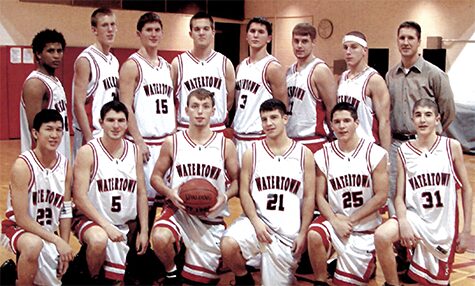 Hall of Fame Coach Steve Harrington consistently had his teams knocking on the door of a State Championship in the early 2000’s. In 2000, 2005 and 2006 the Red Raiders lost in the North Sectional Finals. In ’03 they lost in the Garden in the EMass finals. The gyms at Watertown High and the rest of their Middlesex League opponents was the place to be on Tuesday and Friday nights. Both home and away games were packed with loyal Red Raider fans.

The talent on the floor was brazenly evident, and the atmosphere was routinely electric. The defensive tempo was accelerated, and the offense controlled the boards and shot three’s with no conscience. And in 2007, with a deep and talented team filled with experience, Harrington told us “that was the year Division 3 was loaded, but our summer team had a productive couple months, so going into the season we were confident we could make a good run.”

It became clear during that sizzling summer that this would be Anthony Coppola’s team. The team was stacked, but the 2-time senior Captain and 3-time Middlesex League all-star was the obvious leader. Harrington called him the “most competitive player I’ve ever coached. Since he was younger in grammar school, I knew he’d be an outstanding player for us.” Other key contributors throughout the campaign would include fellow senior Stephen Keuchkarian, junior Jesse Bracket, sophomore twins Kyle and Cory Stockmal, and classmate Benyan Kerman. The Middlesex League was top heavy with its usual studs including Lexington, Belmont, and Woburn, but in a league with so much talent top to bottom, strengths and weaknesses show themselves over the grind of the 20 game winter schedule. Consequently, regular season competition with Division 1 and 2 opponents would prove to have extensive value come tournament time.

The first part of the schedule went according to plan. With an average victory margin of 15 points, home wins over Winchester and Reading, coupled with road victories over Melrose and Burlington led the 4-0 Red Raiders into their annual Christmas Tournament over the Winter break. With an 80-52 win over Dorchester and an 86-52 trouncing of South Boston, the boys were victorious in their tourney and entered the New Year 6-0. After a 14 point victory over Stoneham in early January, next on the schedule was a battle for first place on the road against fellow undefeated Lexington. The first of the two regular season meetings between these Middlesex League heavyweights did not go well for Watertown, losing 77-47.

The stinging defeat motivated the Red Raiders who then went on a 9 game winning streak, which included a decisive 72-61 win over Belmont. Before a packed gym, the Red Raiders dropped the rematch with the Minutemen 77-73, and 3 days later lost a heart breaker to Woburn 66-65 to bring their record to 15-3. Those defeats would be their last losses of the year. To close out the regular season Coach Harrington’s squad toppled Wakefield by 20, and Belmont again 76-67 to finish up at 17-3, good for second place behind undefeated Lexington, and it was on to the MIAA Tourney.

In the first game of the tournament, the powerful offense was in full gear, putting up 76 points in a hard fought five point win over a surprisingly tough team from Minuteman Regional. Up next was Bishop Fenwick, and they gave Watertown its best defensive game of the year, but it proved futile in the 63-58 victory. Coppola lit up the Crusaders, dropping 30 on them, while holding his future college teammate Ryan Sasso to just 14. This set up a rematch with Watertown’s newest post season rival, the Bedford Buccaneers.

Harrington’s teams had eliminated the Bucs from the tournament in 2003, 2005, and 2006, so suffice to say these two teams were very familiar foes. This North Sectional Final would be played at Tsongas Arena in Lowell, a place very familiar to the team and its legion of fans. In 2005, the undefeated 22-0 Red Raiders lost to Lynn Tech in the building, and in 2006 they lost an overtime thriller, so the players were familiar with the sight lines and hard rims of the cavernous hockey arena. In the riveting 63-58 triumph, Coppola and the Stockmal’s were unstoppable, not allowing the Bucs to get into any type of offensive rhythm. Over the last 6 minutes, Watertown made all the big stops and big shots, none bigger than a dagger 3 by Coppola to stretch the lead. Also in this game, Coppola, the Middlesex League MVP, passed former teammate and Hall of Famer Maxwell Kerman to become the school’s all-time leading scorer. Setting personal records aside, Coppola knew what was most important: “it was time to go back to the Garden and win the EMass finals!”

Now just 2 wins away from the school’s 1 st ever hoops State Championship, the next opponent was Medfield, the south sectional champion from the Tri-Valley League. Although he netted only 14 points in the Red Raider’s 65-51 win over the Warriors, Coppola was the story in this one. As Captain and team leader, he played through the pain of a sprained ankle and (a recently) broken finger to lead WHS to victory in front of thousands of adoring students, friends, and families. For a shooter who hit 35 three’s as a junior, and 65 more as a senior, shooting in pain was difficult, but Coppola was committed to the performance. Harrington told us “Anthony had tunnel vision all year. Pain was not going to get in the way. He can literally will a team to win, and you can’t teach that. He just refuses to lose.” But could he and his teammates replicate the spirited performance in just 4 quick days for one more win in the State Finals against defending Champ Sabis High School? Harrington admitted to us that “Sabis was better. They were the defending champs, and had more overall talent. But I told the kids all year that the tougher team wins the tight games. I knew we would be tougher than them.”

The Red Raiders jumped out to a seemingly commanding 30-14 first-half lead, only to see Sabis cut it to 11 points at the break. The back and forth affair featured five ties and five lead changes. Coppola’s injured finger was bothersome, and he struggled from beyond the arc but still managed to drop 24 points on 7-19 shooting. Keuchkarian was immense, adding 16, while Cory Stockmal contributed a line of 14 points and 4 assists. The Worcester Centrum was a mad house as Sabis battled all the way back to tie it at 58 with 9 seconds left. From there, Coppola calmly sank 2 free throws, helped force an inbounds violation, and coolly drained 2 more free throws for a 4 point lead. Sabis sank a prayer 3 at the buzzer, but the Watertown Red Raiders were State Champions with a thrilling 62-61 triumph. Welcome to the WHS Athletic Hall of Fame the 2006-2007 Boys Basketball team.