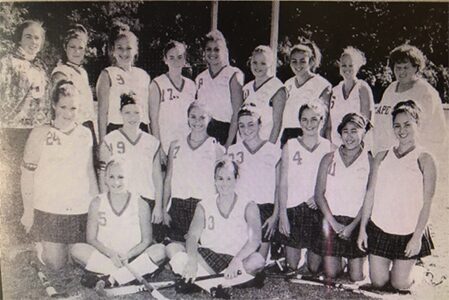 By the time fall came around in 2001, the nine returning seniors on the Watertown High field hockey team already had impressive credentials.

Yet one accomplishment eluded the talented senior players.

The Raiders made it all the way to the title game during their sophomore campaign, only to lose a heartbreaking overtime thriller. And after an impressive undefeated regular season as juniors, they lost a triple-overtime game in the North final.

Led by senior co-captains and leading scorers Sara York and Jay Quinn, the offense would prove to be explosive.

The margin of victory in the team’s first five games was 20-1, the only goal allowed was in a 3-1 win over Melrose. The captains led the way offensively, but others began to step up as well. Junior Mary Rogers was beginning to show her dominance, and was aided by classmates Nicole Bryant, Anita Anastasi and Christine Woodland. Not to be lost in the entire offensive firepower, however, was junior net-minder Meghan Dorsi, who stepped up and solidified the team in goal.

In addition, senior Caroline Vo, Junior Krista Dicker, sophomore Angela Falco, and freshman Kayla Romanelli all began to contribute on both ends of the field.

After a comeback tie against Reading, the girls went on another run, outscoring their opponents 25-3 in the next five games, including a 3-1 win over Lexington that gave coach Eileen Donahue win No. 300 for her illustrious career. From there, the Raiders pitched shutouts in each remaining game, outscoring opponents 32-0 en route to the Middlesex League title and a 17-0-1 overall record.

For their outstanding efforts, Quinn was named the League MVP, while York, Rogers and Vo were named league All-Stars.

After a bye, a second-round tournament matchup with Rockport was a 4-0 shutout. Fifth-seed Tewksbury went down 7-0 in the next game. The D-2 North title game was a nail-biter against Georgetown. Although outshooting their opponent by a 19-2 margin, the Raiders had to go an extra session to clinch the victory.

Tied at 1-1 after regulation, it took just three minutes for Rogers to bury the game-winner and cue the bedlam.

The Eastern Mass. final saw the Red Raiders score early and often against Dedham in a 6-1 blowout and clinched a trip to Worcester for the state title game.

The offense was on fire, and the defense was immense. A perfect recipe for greatness. Four down, and one to go, and Nipmuc Regional was in the way.

In its storied history, the field hockey program was 7-1 in the title game, but history means nothing in the chilled hills of Worcester in November.

York buried one for a 1-0 Watertown lead. Then Nipmuc tied it, and gained momentum late in the second half as Quinn went down with a badly sprained ankle. It wasn’t long before she was out and suddenly the Raiders were down 2-1 as she heard the crowd roar behind her.

Finally, with just over six minutes left, Donahue called timeout and told her team to “Look at the clock! We can score lots of goals in six minutes. We’ve done it all year.”

And with that Quinn re-entered the game, and re-energized the whole team. With just over five minutes remaining, Quinn fed York, and the game was tied at 2-2.

Neither team could bury the game winner in regulation, so it was on to OT. Although playing with a serious limp, Quinn courageously led the awakened offense. About six minutes into the extra session on a corner play, York completed the hat trick and the celebration was on.

Of the winning goal, York said, “I was paralyzed when I realized it went in. I couldn’t feel my entire body. Everything we’ve worked for, everything we’ve put into this, it was worth it in the end.”′

Donahue concurred, adding, “It was a brave effort by Jay Quinn, too. She showed a lot of heart and desire.”

Quinn said, “I couldn’t really give it my all, so it was tough. I tried to run as fast as I could. I honestly don’t remember exactly what I was thinking as the game went on other than I knew my teammates needed me in there. I had to get back in.”