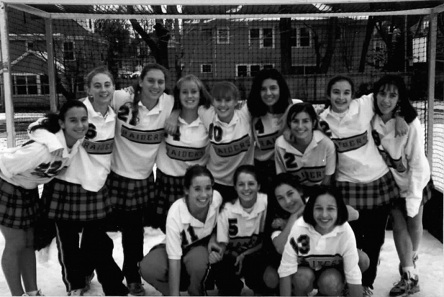 With twelve state championships under their belt it is hard to choose which Watertown High field hockey team is the greatest.

However, when you consider the 1997 team finished with a perfect 23-0-0 record, had the Boston Globe and Boston Herald Division Two Player of the year, the Boston Globe Coach of the Year, and had nearly half their roster named an All-Star, you certainly have to put that squad in the argument.

“I remember the year before we lost in the state championship game,” Jill Fantasia who co-captained the 1997 team, said. “So from day one our goal that season was to go one step further and win a state title. It was a special team because we had such a natural bond and we trusted each other so much on the field.”

Fantasia’s other co-captain on the team was fellow senior Jane Rogers, who to this day is still considered one of the greatest field hockey players to ever play for Watertown. By the time her senior year was over she would become the Massachusetts all-time leading scorer with 141 goals. Besides being named the Boston Herald and Globe’s Player of the Year she also was named a Middlesex League All-Star, the Middlesex League MVP, and a News Tribune All-Star. In other words every honor that could possibly be stowed upon her was given to Rogers that season.

“She was so good that she was the only freshmen that played on the varsity that won the state championship three years earlier,” Fantasia remembered of Rogers, who would go on to become an All-American at Boston University. “The rest of us seniors did not have a state title so this was our last chance. Having Jane was great. She just dominated the Middlesex League. She just had great skill and finesse.”

“We had a lot of amazing players,” Barry, who is now married and is known as Kathy Raute said. “Of course Jane was amazing with her stick skills and the way she knew her way around the field. But everyone was so good and we just had a ball playing together. I think that helped us play so well together as a team.”

One of the amazing things about this team’s ability to go through the season with a perfect record was that they only had 13 players on their roster but the toughest obstacle they had to overcome was starting the year without a goalie. Mary Limerick who was the Lady Raiders goalie the year before had moved to Maryland.

“The thing about that is she never told anyone,” Raute recalled. “I remember the first day of practice and coach Donahue was asking everyone if they had seen her. When no one knew coach Donahue asked if anyone wanted to try out for that position so I volunteered. I was a defensive sweeper on the team in the past but I really enjoyed being a goalie so I asked to stay there.”

“Her willingness to take on that roll was huge for the success of the team,” Fantasia said of Raute. “We went from having no goalie at all to having someone we all felt very confident in.”

After an 18-0 regular season the Raiders were ready to begin the post-season and try to get back to the state championship game; this time hoping for a different result.

In their opening tournament game in the Division Two North quarterfinal the Raiders had little trouble with Saugus defeating them 6-0. In their next playoff matchup the locals got by Amesbury 3-1 and then went on to win another Division Two North title with an easy 5-0 win over Georgetown.

In the Division Two state semi-final another shutout from Raute led to a 1-0 victory over Medfield at Bentley College setting up a Division Two state championship battle with Greenfield. As eager as the Raiders were to play that game the weather did not cooperate.

That November snow appeared early and often and the game was postponed twice. First it was scheduled to be played at Worcester State College but bad weather interfered. Mother Nature would also put a halt to the re-scheduled contest at Nickerson Field. By the time the game was played it was the week of Thanksgiving.

“The wait was tough but the really good thing about it was that when we finally got to play the game it was at Bentley College,” Raute said. “The season wasn’t just ours. Our families, friends, and teachers were so supportive throughout the season so to have the game so close to home was amazing for all of us.”

The game will go down as one of the most memorable in Watertown High field hockey history. Greenfield would score first on a goal from a girl named Kaitlyn Byron.

“I didn’t know her at the time but we ended up becoming teammates at U-Mass and becoming very good friends,” Fantasia said. “There was also another girl on that team that I played with in college. It’s funny how things can turn out.”

At the time of that goal, however, no one was laughing. It looked for a while like the Raiders would fall just a bit short again of winning a state championship. However it was the younger Rogers to the rescue. Catherine, a sophomore at the time, would tie the game before the end of regulation setting up an overtime situation.

The first overtime passed without anyone scoring and the way the second overtime was going it looked like nothing would be settled again.

“That was my biggest fear,” Raute said. “If it was tied after two overtimes we would have to go to penalty strokes. As a goalie that is the last thing you want because it all falls on you.”

However MacDonald would score one of the most dramatic goals in Raider history just before the second overtime expired giving the Raiders the state championship. Raute would not have to worry about penalty strokes. Instead she could join the celebration with her teammates.

“I still remember the overwhelming level of emotion after that overtime goal,” Fantasia remembered. “Everyone was ecstatic. I know all the seniors were really happy and relieved but I thought we deserved this moment. As juniors we poured our hearts out into every game and fell just short. We really wanted to win one for Eileen because she had done so much for us and we knew this was our last chance.”

Donahue was and still is today considered among the best field hockey coaches in the state. You have to look at her numbers at least twice to actually believe what you are seeing. Following the 2012 season Donahue had recorded 505 wins 30 losses and 45 ties while leading the team to 12 state titles, 22 Middlesex League Championships, and 19 Division Two North Championships.

“Some of the practices were really tough for us,” Raute remembered. “But we all knew how great a coach she was and how lucky we were to have her. She taught us so much more than just field hockey.”

Effort and sportsmanship are two things that Donahue always valued and that is exactly what the 1997 team displayed on their journey to a 23-0-0 mark and a state title.

And that’s why they are now an unforgettable part of Raider immortality.