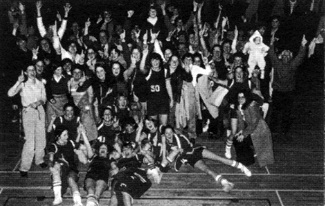 They called themselves the “Hoop Pack,” and as Coach Kevin McLaughlin recalls, “we certainly added credence to the never underestimate your opponent.”‘

The team was Watertown High’s 1980 girls’ basketball squad, which reached goals that year that, before the season, would have been laughed off by cooler heads. But cool heads don’t scrape and edge and elbow for every minute of every game. Cool heads don’t dive and run and sweat. Cool heads don’t believe. And this squad believed in itself and its dream. One local reporter summed it up: this squad proved “that hustle and heart have a lot to do with winning.”

The dream begins with players, of course, and the Raiders were hardly running on empty in this regard. No fewer than three Hall of Famers in senior Lisa Yankowski and juniors Paula Pomponi and Mary Duffy led the team. And they had plenty of backups, from seniors Sheila Quinn (the co-captain) and Denise Nugent, to junior standouts Eileen Coffin, Lesley Horne, Anne Donnelly, Judy Kalashian, and Lynne Clancy to sophomores Josephine Hanlon, Nancy McNicholas, Jeanine Haggerty, and Pam Clancy. In a typical game, everyone played and ten people scored. There were individual honors to be highlighted, to be sure. Yankowski was the team’s high scorer with nearly 15 points a game, second in the Middlesex League (she averaged 22 points a game over the first half of the season), a league All-Star who in addition to her scoring contributed ten rebounds and four steals per game. In one contest versus Reading, she notched a triple-double with 23 points, 19 boards, and 11 steals. Duffy chipped in 10 points per game; Lesley Horne was in double figures both in points and rebounds. Pomponi was a gutsy defensive sparkplug at the point. Overall, though, it was about the team as a unit. The team had character and never went into a matchup willing to accept defeat. “Our banners read’s little bit of heart,”‘ Coach McLaughlin recalls. “Fact is, no team ever had more heart – and that is what made us special.”

Special they were. The team posted a strong 13-5 regular season against a tough league schedule, getting strong efforts and wins when most they needed them Still, they entered the state tournament as decided underdogs, seeded thirteenth. Paying with nothing to lose they didn’t.

In the first round came and went Methuen High, dispatched 45-38 behind a dozen points from Yankowski and fourteen from Coffin. Next up was with Concord-Carlisle, seeded fifth. Here, too, in a tremendous defensive struggle, the Raiders prevailed. The Watertown zone held the Patriots to thirty-two points, with Pomponi and Pam Clancy shutting down the guard spots and Horne battling inside. All year the team had proved they could play with the best; now they were proving they could beat them.

And in a magical third round matchup, that is exactly what transpired. Peabody High was 20-0, Greater Boston League champs and the second-ranked team in Massachusetts. But the gymnasium was packed to the rafters, a special reserve bleacher section opened to accommodate the hordes of faithful Raider fans. And the squad did not disappoint. Down by nine points in the second quarter the team chipped away until finally Watertown had the lead after critical baskets by Duffy and Yankowski (who poured in twenty points overall). Peabody crawled back to tie the score with five minutes to go. But the Raiders stepped up. Key defensive stops were made -key free throws were iced – and at the final buzzer Watertown had won by six. The fans stormed the court in wild celebration. One reporter found the whole affair so emotional as to be “a bit reminiscent of Lake Placid.” The Raiders found themselves at the pinnacle, in the Division I north finals against undefeated and top-ranked Salem.

Going into the championship game, the Boston Globe commented worrying that “Watertown has left all opponents wondering what they forgot to (ook under.” Trailing by just five at the half, gutsy Watertown never gave up – but in the end, Salem was simply too strong. Nonetheless, it had been a great season for the team and for the community.

As Coach McLaughlin said in a classic understatement, the team had “certainly surprised some people.” Salem coach Tm Shea gave due credit to the Raiders’ amazing effort and to their special ingredient – “something inside.” While the Raiders received the Division I runner-up award, there seemed clear consensus that in terms of spirit and heart the team had won the championship.