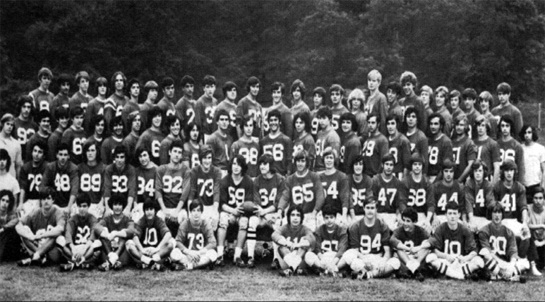 In the mid 1970’s the Watertown High football program reached the height of its success. The Red Raiders were a dominant force winning three Middlesex League titles in five years but those glory days didn’t begin until the 1973 squad put the program on the map. In capturing the school’s first ever Middlesex League title, the Red Raiders finished 8-1 sharing the league crown with Wakefield, who finished with that same identical record. However, in their head to head battle it was the Red Raiders who came out on top.

“Going by today’s standards (tiebreaker head to head match-up) we would have been the lone Middlesex League champs,” head football coach of that ’73 squad John Barbati said “Nonetheless, it was quite a team and quite an accomplishment. Back then we were only a member of the Middlesex League for a few years.”

The squad, which will be inducted into the Watertown Hall of Fame on May 9, began their quest of their first league title with an opening game win over Wakefield. The Warriors, who were the league favorites, were the first team to notice how good the Raiders were and when the other teams in the league saw that final score, they soon became aware that Watertown was a threat.

“We caught the other teams by surprise,” Barbati said. “But I knew we were going have a very strong team. We were 5-3 the previous year and I saw how good some of our sophomores were and I knew they could only get better. All we needed to do was work hard and the boys did that all season long. They really played great both offensively and defensively and had a great cohesiveness to them. They had a fabulous season and certainly deserved to be called champions.”

John Papas, who has been a high school football coach for 30 years and is currently the head coach at Buckingham Browne, and Nichols, a prep school in Cambridge, was a senior tight end on that memorable team and enjoys recalling how good that squad really was.

“Although we had a lot of guys from that team go off to play college ball, we were really a team without superstars,” Papas said. “But this whole team just gave a tremendous effort all year long. The one word I can use to describe that team was tough. I have been involved in football for over 30 years and that was definitely the toughest team I have been a part of.”

Led offensively by junior quarterback Chuck Laurie and running backs like Peter Torilli, Chuck Aiello, and Arthur Bogolus and led defensively by guys like defensive tackle Bob Fico, defensive tackle Paul Wright, free safety Brian Costello, and co-captains Rich Haley and Tim McManus, the Raiders had some laughers along the way. They throttled Lexington 40-6 in one of their games and ended their careers happily with a 35-6 rout of Belmont on Thanksgiving. However, it was just one game that kept them from perfection. A mid-season two-point loss (14-12) at Reading prevented them from being the first undefeated team in school history and a realistic shot at beating Brockton in the Super Bowl.

“That Reading game was originally scheduled for a Saturday, “Papas recalled. “But they wanted to play it on Sunday because they thought the rain would be too much of a factor. It’s too bad because we were pumped up for that Saturday game and when Sunday came around the air might have been let out of us a little bit and we came out flat. I thought we were a better team and we easily could have run the table that year.”

Nonetheless, the Raiders did not dwell on that mid-season loss recuperating very nicely to finish the season strongly.

“The loss to Reading hurt especially knowing we could have easily won had Aiello not been hurt, (knee injury in first half sidelined him for rest of the game) Laurie recalled. “But I remember we played our best football of the season after that loss and we owe a lot of credit to our seniors for that. They wouldn’t let us get down on ourselves. They were exceptional leaders. They were a big reason for our success. I never have been involved with such a hard working team and I felt the seniors made sure of that. They were a very close unit. When you saw one senior member of that football team, you saw about 15 of them.”

It was this type of unity, effort, and determination that got the Watertown community interested in football again.

“I remember at the end of the year we had a sold out banquet with about 500 people showing up, “senior offensive guard on the 1973 team Ken Woodland said. “The town really got excited that season. This team made football a big deal in the town and the people really supported us. It was a great time to be a high school football player in Watertown.”

Woodland, though, did not feel that way at the pre-season football camp held in Wolfeboro New Hampshire. For one solid week, Barbato and his coaching staff would take his team out of state to prepare for the season. Those three a day practices coupled with scrimmage games were physically demanding to say the least.

“I remember a lot of people throwing up,” Woodland recalled with a laugh. “But we were a bunch of very tough dudes and that week really conditioned us for the season. “I tell you that no matter what shape you were in before that week; you came out of that week in the best shape you have been in in your life. Some people lost as much as 20-30 pounds.”

It was a tough grueling pre-season and regular season for the 1973 Raiders but somehow they managed to pull off one of the most memorable seasons in history. They wouldn’t let each other quit and constantly encouraged one another. Woodland said it was like they were all brothers.

“Watertown was a small town and we all hung around together and I really thought that helped us a lot on the football field,” Woodland said. “I thought our chemistry led to all those wins. We started a football dynasty in this town because we had a special bunch of players.”

Woodland also stated that the team had a special bunch of coaches as well. He knew his head coach was one of the best around calling him a master of preparation.

“Coach Barbati knew he had to make us stronger, faster and better conditioned because he knew he couldn’t make us bigger than the teams we played,” Woodland said. “As players we saw the 100% effort the coaching staff gave us so in return we wanted to give them back 100% of our effort.”

Assistant coaches like Leo Harrington and Billy McCarthy (quarterback coach who is now a principal at the Hosmer School) were outstanding additions to Barbati’s staff as was assistant coach David Hughes. Hughes, who went on to great success as a head coach at Hopkinton High School, still brings smiles on the faces of the 1973 team even today. With just as much passion for the game as Barbati, the Watertown squad knew they had a real find in their defensive coach.

“Everyone on the team loved him,” Woodland said of Hughes. “He was about ten years older than us but man he was in tremendous physical condition. It was like he was chiseled out of marble. I remember he would play running back in practice and he would encourage us to tackle him as hard as possible and he wouldn’t have one piece of football equipment on. He was really something and helped make us a tougher team.”

Paul Ryder, who played defensive end and offensive tackle as a senior in the ’73 campaign agreed the team was tough but he also thought key factors included the togetherness of the team and the work ethic encouraged by co-captains Haley and McManus. However, there was one moment in his sophomore year that he felt set up the success of the 1973 season.

“Most of us seniors who played on that ’73 team were part of a jayvee game we had as sophomores when we couldn’t score from the one yard line with the game on the line,” Ryder remembered. “We had several chances to win the game but couldn’t move the ball forward. We all gathered after the game and said we were never going to let something like that happen again. I think that loss was a rallying cry for the players and we carried that determination right into the 1973 season.” And right into the Hall of Fame.