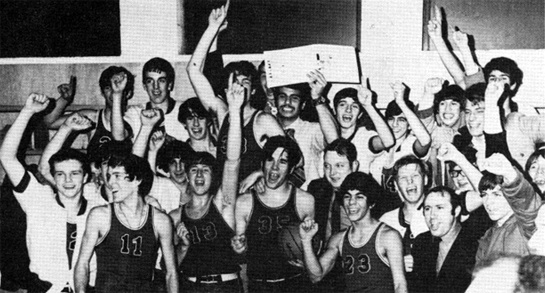 In 1940, the Watertown High School boys’ basketball team went to the state tournament (played at M.I.T. – hence, the “Tech Tourney”) for the first time, led by such future Hall of Famers as George Yankowski and Vic Palladino. For thirty years thereafter, Watertown basketball wandered in the wilderness. Then, in 1971, some- thing happened.

The 1970 team had been pretty good, going 11-9 and wiping out a slate of sixteen consecutive sub-.500 sea- sons. But no one really expected the ’71 squad to do much better.

By the spring, though, there was a lot of talk about miracles. ` `John M. Myers is the man’s name,” began one article about the team’s head coach. “The middle initial must stand for Messiah.” The team’s roster had no real superstar, just a lot of hustle. Starters included Charlie Barrett and Bob Beach up front; Charlie Banacos, Bob Patey, Jay McManus in the backcourt; and, for the sake of destiny, George Yankowski, Jr. at center. All made standout contributions. But there was no one who did not. Capitalizing on a lot of depth and even more desire, the team got off to a 10-1 start and finished the regular season 15-5. It was on to the Tech.

The team didn’t disappoint. In a thrilling finish against first-round Needham, the Raiders – down by seven with four minutes to go – battled back to win on a baseline drive by Bob Beach with thirty seconds left. 53-52. Leigh Montville, in the Globe, described it as a “Giant” finish: “the buzzer sounds, you check the scoreboard . . . and then the world explodes. Like it did yesterday for Watertown: ‘ It was WHS’ first tourney victory ever. “That,” exulted Myers, “was a game you and I both should have paid to see: ‘

It didn’t end there. In the next game, against defending champion Hyde Park – a team with a fifteen game win streak – Barrett scored sixteen and Yankowski fourteen to take the game into overtime. And then, with time running out in overtime, pint-sized Charlie Banacos became Watertown’s hero with a richochet bank shot from 18 feet. Watertown 57, Hyde Park 55. The fans screamed “Greek Power!” It was on to the semi-finals.

Framingham South was next, and never had a chance. Twenty-three points from Barrett, tenacious defense and great floor leadership from Patey and McManus led the way to an easy win.

The Tech was the fairy tale, and Watertown High was Cinderella – indeed, one paper said, ` `the Cinderella of Cinderellas: ‘ The town exploded even further with support, if that was possible, uniting behind their own impossible dream. Extra newspaper editions were run; businesses closed. Bob Patey remembers lines of buses full of supporters packed all the way from Broadway to Common Street, all headed to the Garden. Magic was in the air.

In the finals, Watertown would face undefeated Lexington. Battling to a halftime lead of just four, in the end, big, deep Lexington was too much for the Raiders. It was midnight for Cinderella.

Yet, the Globe wrote, in awe of the bond between town and team, “there was an ovation. It began with a minute left to play and didn’t end until Watertown High School’s beautiful dreamers had been finished. An entire town seemed to rise and applaud . . .”

Watertown’s dream was the story of the year, and something neither the team members nor the town have ever forgotten. A local scribe noted that ` `this was the finest tribute to a team and example of a school that has ever been seen at the Boston Garden.” And as John Myers said after the Hyde Park game, `this is the greatest thing ever to happen to me. These kids are the greatest.” Tonight we salute all the members of the Tech Tourney team, and remember those magic days of March.