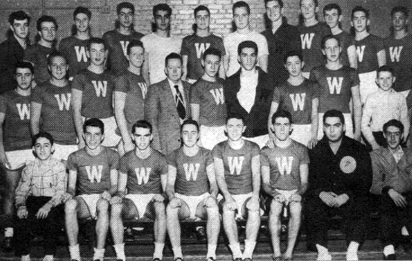 Watertown residents, no doubt, remember the Truman and Eisenhower years for many things. The Korean War heated up and the Cold War n iced down; America dominated world trade as Elvis would soon dominate the airwaves. But those who follow Watertown High athletics might immediately bring another sort of dominance to mind. For 1948 to 1960 marked Watertown’s ownership of schoolboy track and field. And the 1955-1956 team served as the apex of that very special era.

Under the direction of Hall of Fame Coach Bob Gleason, the indoor track, outdoor track, and cross country squads of 1955-56 accomplished something few others have equaled in the history of Massachusetts track and field. Every member of the 1955-56 teams who participated for all of their three years at WHS won nine state track titles. For the seniors this season wrapped up three years’ worth of championship effort. But this was only the tip of the iceberg; two more years of title sweeps would be forth coming. After all, the talent kept on coming. To call even a partial roll is impressive enough: witness Dick Bartley Joe Basile, Sal Boccodoro, Nick DeNitto, Jim Gleeson, Jim Kelly, Paul Kelly, Paul Landry David McGown, Peter Mercer Walter “Sonny” Robak, Lou Romanelli, Don Tomasetti, David White, Jack Williams, Ed Wingfield, Paul Woodland, Mike Yelland and Ron Young. The team was a mile deep, a classic mix of balance and power stirred perfectly by Gleason’s coaching genius.

The 1955 cross-country team, with Jim Kelly and Sonny Robak as captains, went undefeated in the Pioneer Division of the Middlesex League, against powerful squads like Arlington, Beverly and Belmont. Next came the state cross-country championships at Franklin Park. Having won the Class B title the five previous years, Watertown opted to move up to Class A to take on the larger schools. Led by Woodland, Robak, and Kelly, the move paid off: the Raiders were Class A champs, selected to represent Massachusetts in the New England championships. A search of the records indicates, in fact, that this was the only Class A title ever won by a Watertown team. But there was more to come.

The indoor team continued to show their supremacy, easily breezing through the dual meet portion of the season. Kelly, Robak, Woodland, and Williams dominated their running events and DeNitto the shot put. Jim Kelly and DeNitto were undefeated in league competition; Paul Kelly and Williams won four out of five meets in the hurdles and 300, respectively. Sophomores Boccodoro and Basile likewise owned the dash, winning four of their five dual meet races. The relay team showed the depth of the squad overall, winning all five meets while utilizing nine different athletes. The 1956 state meet was, again, an all-Watertown show. Having won the last two indoor titles – and four of the last six – the Raider harriers were back for more, and they got it, scoring in every event on the program but one. So dominant was Watertown that if any other team had managed to win every event, they still would have lost the meet to the Raiders by two points.

Again, it was the seniors who led the way. Jim Kelly won the 600. Woodland won the 1000. Robak took the mile. Paul Kelly, Pete Mercer and Ed Wingfield took three of the top five hurdle spots. Jack Williams was second in the 300-yard run, just ahead of junior Nick DeNitto, who also won the shot put. Gleeson, Boccodoro, Tomasetti, Bartley and Young also added points – as did the relay team, which shattered the Meet record in a photo finish loss to Arlington. Watertown’s fifth state title in seven years was in hand. “The victory added to Watertown’s reputation as a track and cross country power” one reporter drily noted in a bit of understatement, “And added to the luster of Coach Bob Gleason’s record.”

The outdoor team that spring was not to be outdone. With the same cast of characters still working at peak performance, the Raiders’ combination of experience and youth proved unbeatable. There were simply no weaknesses on the team – from the distance events to the dash to the discus, where Romanelli extended the school record past 127 feet. The team dominated the state relays, the Class B meet-their eighth outdoor title in nine years – and performed very well in the Penn Relays to boot.

That kind of national competition gave the team great exposure – to athletes from all across the country and also in the press and collegiate corps, given how well the Raider athletes fared against their counterpart competitors. Great track guru Ralph Colson said many times that Watertown had the most powerful track teams he had seen in forty years of watching the sport. Carl Seamen and Mel Wenner both of Belmont, were likewise always gracious in their praise of the team’s accomplishments. Indeed, when coaching at Belmont many years later Dick Bartley became friends with Wenner. “Try as we might,” Wenner would frequently recall, “We could never beat you guys.”