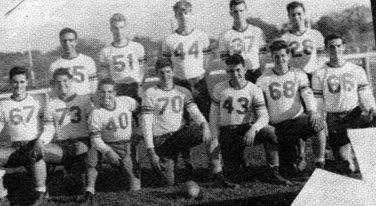 In the Fall of 1949, the Watertown High football team was the talk of the town. Before the first report on that season in the Watertown Sun, friends and neighbors shared what they knew about new head football coach Joe Zeno and his team.

All agreed that Zeno was an able young football mind. He had played professionally for the Washington Redskins and the New York Yankees and left an assistant coaching job at his alma mater, Holy Cross, to come to Watertown.

They also agreed that Zeno’s coaching skills would be tested. On the first day of football practice, 24 candidates for the team showed up. Of that number, only one third had any varsity experience, and just two of those 24 had started in the Thanksgiving Day game against Belmont the year before.

What happened next was a magical season for Watertown football and the Watertown community, when the Raiders won their first seven games in a row, eight of nine in all, culminating in a thrilling one-point triumph over Belmont on Thanksgiving Day 1949.

“I like to tell people that there were three things we had on that 1949 team – leather helmets, no face masks, and guts,” said Gene Renzi, retired two-star Army General and a starting lineman on that team with his older brother Phil Renzi, team co-captain.

Right from that first practice in August 1949, Coach Zeno inspired confidence in each player, stressing that each young man on the team was valued, and would play a part in its success. As Zeno was fond of saying, “there are no big shots on this team, only 11 players working in unison when on the field.”

After just three weeks of practice, the Raiders hosted Class A power Brockton for a scrimmage at Victory Field. The game summary in the Watertown Sun opened with a glowing report from Brockton head coach Frank Saba, who just witnessed the Raiders beat his team, 24-6. “That’s a good football team,” Saba said after Watertown quarterback Phil Stackpole threw three touchdown passes to speedy halfbacks Carmine Parella and Jack Charshoodian. “It ought to do all right this season.”

The Raiders certainly did all right in the season opener, defeating Dedham by a 20-7 score, thanks to a touchdown runs of 13 and 25 yards by Charshoodian and another score in the second half on a three-yard plunge by fullback Steve Hemphill. Coach Zeno sounded a cautiously optimistic note after the game, stating, “There is good material here.”

That became obvious the following week in Watertown’s dramatic 37 to 13 win over Winchester. Stackpole and Jim Lopez alternated at quarterback, and both young men proved they were capable. Lopez tossed an 18-yard TD pass to Parella to give the Raiders a 6-0 lead, then, in the second quarter, Stackpole scooted for a 66 yard touchdown and threw two more TD passes, one to Charshoodian, the other to end Tom Vasquez to put the game out of reach before halftime.

New Bedford was Watertown’s opponent in Week 3 of the 1949 season, and, the Whalers were impressive, out rushing Watertown by nearly 100 yards. Yet it was the Raider defense that was decisive as the Raiders prevailed, 13-7, when the Phils – Stackpole and Phil Renzi – made touchdown-saving tackles on New Bedford’s star runner, Bob Watkins, who later played for Ohio State and the Chicago Bears. Meanwhile, on special teams, Lopez contributed an 86-yard punt return for one of Watertown’s scores.

Talk around town was that this original untested group of 24 had risen to become a formidable team which expanded to 36 players by midseason. Talk around town spread louder and wider when Watertown closed out the month of October 1949 with a pair of lopsided shutouts, 32-0 against Wakefield, then 20-0 over Woburn, to improve to 5-0.

“We had a sense when we started to practice on Monday for the next game that we had a chance to win,” Gene Renzi said recently. “It was a great lesson in life – no matter the challenges, prepare to win.”

Towners marveled at a Raider offense that could shift into high gear quickly with some important cogs in those gears in halfbacks Charshoodian and Parella, and fullback Hemphill to get the tough short yardage. The quarterbacks Stackpole and Lopez were equally adept passing and running the football, and had a capable line with center John Vlachos, guards Murad Tavitian and Clyde Russian, Ralph Mee and Gene Renzi at tackle, and Phil Renzi and Vasquez at the end positions.

When Watertown won its sixth straight game of the season, a 34-13 final over Fitchburg, the versatility of the offense was illustrated by the fact that five different players scored touchdowns: Vasquez, Lopez, Charshoodian, Parella and Phil Renzi, and a sixth, Don Sabino, made four of five extra point kicks.

When interviewed by the Boston-area newspapers, Coach Zeno said that it was his philosophy that all 36 players contributed to Watertown’s sensational 6-0 mark.

“In four of our six games we have used the entire squad and we have not yet used fewer than 25 players. This makes everyone feel like a football player…. That’s important, believe me.”

Watertown believed. So did the capable replacements on the offensive line, like 315-pound Joe Merullo, guards Nick Avtges and Aram Bazarian, center Dave Wright and back up ends Paul Stackpole and David Foley. So did the runners who gave Charshoodian and the other backs a breather, like Sabino, Carl Centola, Joe Catolanotti, Dick Shannon and John Zona.

By that juncture, the Watertown School Committee had all of the information it needed to decide to reward Coach Zeno by naming him the school’s Athletic Director in addition to his post as head football coach.

By that juncture, Towners did more than talk about the Watertown High varsity football team – they went to see the games in record numbers, in thousands. These fans were rewarded with a seventh consecutive win against Brookline, a 26-0 shutout that was capped by Charshoodian’s acrobatic touchdown catch.

The only down note in Watertown’s Fall 1949 football season came when the Raiders could not extend their consecutive win streak to eight games, dropping a 32-0 loss to Arlington, the Class A Champions that year. The Watertown Sun recorded that it was the most attended game in school history, with a gate of upwards of 14,000 fans.

Those fans, and their beloved team did not stay discouraged for long, rebounding on Thanksgiving Day with a thrilling 14-13 win over Belmont. After Watertown took a 14-7 lead after Sabino connected on the extra point after a quarterback sneak by Lopez, Belmont rallied with a touchdown but fell short when Tavitian blocked the Belmont PAT.

“That was a lesson in character,” Gene Renzi said. “There will be disappointments, like the Arlington loss, but to come back from those disappointments shows tremendous spirit. We came back because we were willing to sacrifice for each other and the team in order to succeed.”

Watertown concluded its successful Fall 1949 season with an 8-1 record, good for third in the Class B standings, and, the community announced that the Raiders would be honored along with two other great schoolboy teams from that year, the St. Patrick’s Football team and the 1949 cross country team, at a special dinner held at Watertown High in February 1950.

Since then, these Raiders have continued to strive for excellence in their school, work and family lives. Seven of them have been honored with individual recognition and induction into the Watertown High School Athletic Hall of Fame: Lopez, Gene and Phil Renzi, Dick Shannon, Phil Stackpole, John Vlachos and Jack Charshoodian with the current class of 2006.

However, some fifty years later, those 36 young men and their Hall of fame coach, Joe Zeno, continue to be the talk of the town as one of just a select few Raider teams ever to be inducted into the school’s Hall of Fame.