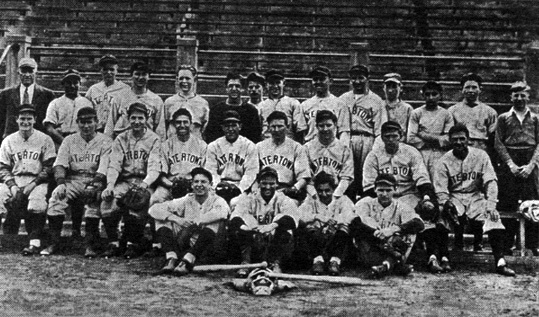 To call the roll of the 1939 Watertown High baseball squad is to understand at once why that team is being inducted into the Hall of Fame. Oscar “Skee” Khederian. Bill Kearns. Mike Calden. George Yankowski. Fred Antinarelli. Bill Shannon. Matt Keefe. Ernie Mannino. Larry Jenkins.

Add to this a 20-4 record and a berth in the state finals in Fenway Park, all against one of the toughest schedules the Raiders ever faced, with Lowell, Athol, Belmont, and Brockton all on the regular-season slate. The result is a recipe for greatness.

And the’39 squad did not disappoint on that score. Three-time all-scholastic Khederian – “the boy wonder himself,” as one paper put it-was the shortstop, the team captain and sparkplug, batting .495 and leveraging his slim frame for power as well as average. Antinarelli was at first base, Keefe at third, Kearns – “the smoothest keystoner in the business,” according to local reporters – holding down second. All in all, as Watertown Sun pundit John Day noted, “the Watertown infield of 1939 was the slickest in the state and probably the most outstanding in modern high school ball.”

Yankowski was behind the plate. Displaying the form that would take him to the major leagues with the Philadelphia Athletics three years later he hit .508 in 1939, a consensus all-scholastic. The Boston Globe commented that “Yank…is the cream of the crop…He hits like nobody’s business and when hits are needed. He makes a fine target and his throwing to the bases is deadly.”

On the mound were such stars as Calden, Shannon, Mannino, and Jenkins. Calden was dubbed the “pitching sensation of the year” by the Boston papers, lauded for his ability to put across that “‘where-is-it?-ball’ when strikeouts have been most needed”; he wound up with eight wins and a 2.41 ERA, striking out 90 and allowing just 51 hits in 74 innings of work. Shannon ran up a 5-1 record with an ERA under two, piling up fifty innings of sterling baseball himself. “Most coaches would shout for joy if they could tick off such an array of pitching talent!” crowed one local paper and indeed, many shouts of joy were heard to come from Victory Field that year.

This came as something of a surprise. The Raiders were coming off a decade of championship squads, led by Hall of Famers such as Whitey McDermott, Bob Daughters, George Sexton, and Lefty Lavrakas. The pitching was inexperienced, the bulk of the order young. As a result Coach “Dirty Dan” Sullivan – so-named for his thesaurus-like command of the less savory phrases in the English language – expected that 1939 might kick off a series of those dreaded “character-building” seasons. Instead, the team moved upwards to the pantheon. The Raiders got off to a 131 start, running off streaks of eight, six, and five games on their road to Boston and the state championship against Norwood.

Many of the team members went on to play minor and major league baseball, as might be expected. But when World War II broke out two years after graduation, there was little hesitation – the ’39ers joined a larger team and served valiantly in all theaters of the conflict, deferring or sacrificing professional careers. Shannon, perhaps most notably, won the Navy Cross for extraordinary heroism at Iwo Jima; but that heroism was echoed in the acts of many of his classmate and teammates.

The’39 baseball team is likely without peer in Watertown’s rich history on the diamond. It served the town – and our nation – with honor and distinction. The Hall is proud to pay it some small tribute in return.