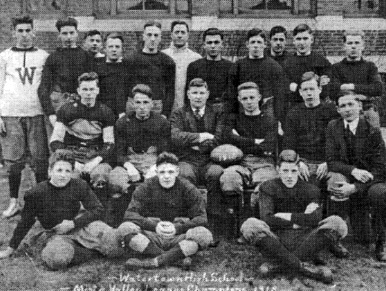 When the Hall of Fame was formed in 1991, the first team chosen for induction was the undefeated 1977 football squad, thought to be the only unbeaten and untied team in the school’s history. But detective work in the archives by Hall Board member Nick Avtges led to an intriguing discovery: at the close of play in 1918, the standings revealed a remarkable story. Watertown High was 7-0-0. Points for 258. Points against, none.

That is not a typographical error the 1918 squad was undefeated, untied – and unscored upon. 8y any measure, in any era, this is astonishing.

In the spring of 1918, former Holy Cross all-star Jack McDonald took the reins of Watertown High sports and led the baseball nine to the Mystic Valley League title. In the fall, he turned his hand to football, with similar result. The very first game served notice, as the Raiders beat powerhouse Newton for the first time ever posting a 7-0 shutout behind tight defense and a sixty-five yard interception return for a touchdown by Robert Conroy. It only got better from there. Watertown beat Norwood, 35-0; Wakefield, 49-0; and then crushed much bigger Framingham by a score of 51 to zip. Arlington was next up – and next down, 29-0. Melrose fell even harder a startling 76-0, despite the absence of their starting quarterback, nursing an injury. The Raiders beat Brookline, then WHS’ Thanksgiving opponent, 13-0; but by then, the fact that Watertown merely beat rather than swamped the opposition was deemed occasion for the Brookline local paper to give thanks.

The Raiders’ last two scheduled games were not played-postponed because of weather; they were cancelled as the Spanish Flu epidemic swept through Massachusetts. At that point, though, cancellation was a kindness to Watertown’s opponents. The Mystic Valley League Championship had come home. The Raider eleven had run up a record, one Boston paper noted in an understated way, “of which few schools can boast.”

Five members of the team were named to All-Scholastic rosters – Hall of Fame halfback Ed Cousineau, center Waters, fullback Stephen, tackle Ferris, and back Shanahan. But perhaps, as so often, the picture tells the story best.

The narrative starts with the back row. On the far left stands Ed Cousineau. Next to him, Joseph Malley, who would go on to teach for years in Watertown, tagged with the affectionate moniker “Jungle Joe.” Seventh from the left, left guard Vahan Derderian.

Together with their teammates the three form a snapshot of Watertown at its best: a town of diverse immigrants, optimistically melded together in community through hard work and team work, their fruits bequeathed to those who follow. As the 1918 team is inducted into the Hall of Fame this spring, that last point will be poignantly clear: Frank Cousineau, Joe Malley, Jr., and John Derderian, all Watertown High School graduates themselves, will receive the tribute on behalf of their fathers – and their fathers’ generation.

It’s a tribute long overdue. But the Hall of Fame is delighted to mark the team’s standing in history – and to commemorate it permanently on Victory Field’s Wall of Fame. A fitting legacy of place, perhaps, for a team so rooted in its community, and a community so rooted in the history that team represents.