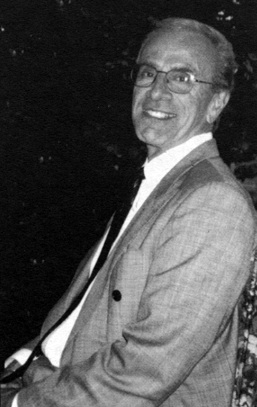 When we look back at our lives there is always a school teacher that sticks out as our favorite. For most folks in Watertown, that person is Richard Najerian.

For over 45 years in the Watertown school system, Najerian touched thousands of lives with his unique method of teaching that not only drew the admiration of his colleagues, but made his students look forward to going to school. He was simply a parents dream.

“My three kids all had him and they loved him,” 80-year old Jimmy Bean said of his longtime friend who will receive the “Special Recognition Award for school and community service as part of his induction into the Watertown Athletic Hall of Fame on May 9. “He dealt with all types of kids but he just had a way with all of them. He just has this nice, gentle, caring, and courteous manner about him and that is one of the reasons why I have been friends with him for over 25 years.”

Najarian, who went through the Watertown School system as a student through 1952, returned as a teacher shortly after getting his degree in education from Boston University in 1956. From his first day in a Watertown classroom to his last day in 2001, Najerian impacted so many lives by going well above and beyond what is asked of any teacher. He proved from the get-go that the well being of his students mattered most and that he would do anything in his power to make their lives better.

“He sought out and helped so many disadvantaged students,” recalled former West Junior High colleague Carmen Quintiliani. “I can vividly remember him spending many hours of his own time counseling and assisting students with personal problems as well as offering help with admission to college.”

Watertown native Dick Berardino, who before becoming a third base coach and then a consultant for the Boston Red Sox, was a colleague of Najarian’s and he also remembers some of the qualities that made him such a special teacher.

“Besides that wonderful enthusiasm he had, he also had that natural sincere interest in every student.” Berardino said. “No matter what the situation, he always made himself available for students who wanted to discuss personal problems. I am proud to call him a close friend.”

Mike Noftsker knew of Najarian’s reputation before he became Watertown High principal and then saw first hand why he had such an outstanding one.

“He would always came in really early and leave really late making sure he was there for all the students,” Najarian recalled. “He was the consummate student-driven teacher both academically and socially.”

Among his many teaching accomplishments through the years included becoming the principal of the West Junior High Summer School, becoming a system-wide curriculum administrator assigned to Watertown High School, becoming the Director of Social Studies in 1974, and even teaching “Curriculum Design” to teachers at Boston State College (now U-Mass). However, despite all of that, his claim to fame as a teacher may have been the fact that he was the innovator of the most popular class ever at Watertown High School.

“It was called Senior Seminar and the idea was to allow seniors in high school to talk openly about social issues,” Najarian explained. “I felt it was so important that those kids be allowed to discuss things like drugs, alcohol, relationships, etc. where otherwise they couldn’t. I had several different speakers in that class like pregnant girls, gay kids, and recovering alcoholics to talk to them and hopefully help them learn things and teach them how to cope with life’s problems. There were no books or tests. The kids kept journals and were graded on discussion.”

It not only turned out that nearly every senior wanted to take part in that class but word quickly spread about it’s success to other schools and it became the most copied program by other school systems. It lasted for 15 years when it was finally decided by the powers that be that the class would be cancelled in 2000.

“It was too bad that happened,” Najarian said. “Because I know the seniors really looked forward to it. I remember the huge protest they put up when it was cancelled and that it even went as far as a public hearing.”

Najarian will first and foremost be remembered for his contributions as a teacher, but not too many people realize that he was also one of the most successful coaches in Watertown history. During his tenure behind the bench at West Junior High, he led his team to a combined 122-29 record which included four league titles and the Eastern Mass freshman championship won in 1972 with a two point win over Catholic Memorial at the Boston Garden. The 17-0 record was the first ever undefeated season of any sport in Watertown school history.

“A bunch of us from that team recently got together for a 50th birthday party,” Chuck Laurie, a member of that particular squad said. “And all of us agreed that was easily the most fun we have ever had in our lives playing sports. Usually in your athletic career you will remember a high school or a college coach the most but the first guy that comes to mind for all of us is our freshman coach. That is unheard of and that alone speaks volumes about the man. A teammate (Jimmy Simpson) even brought his 1972 championship jacket to the gathering. It is something he will always treasure.”

Lauire never had the fortune of having Najarian as a school teacher but seeing the way he taught for three years as his coach was more than enough to impress him.

“He was so far ahead of his time,” Laurie said. “He would teach us things that most players wouldn’t learn until high school. The beauty of his teaching is that he could do it with humor and no matter what, he was always there to help you. He truly cared about every student and every athlete he came to know. I even remember one time a boy refused to go to a basketball dinner because he couldn’t afford new shoes and felt out of place. When Mr. Najarian got word of this, he bought the kid new shoes without drawing any attention to himself. I was always hoping that he would become the high school coach when I graduated from junior high but I realize now that Najarian knew the importance of teaching kids the right things at the junior high age and that he didn’t want to leave.”

Laurie went on to become a standout quarterback for the High school team and was inducted into the Hall of Fame in 1993 but he didn’t forget to mention one man who was a big influence in his life.

“I was amazed because I was not only one to mention his name when I spoke,” Laurie said about Najarian “Everyone who was inducted that year made reference to Mr. Najarian. What a tribute that was. I know so many people today who have gone on to become successful that attribute their success to him. He is one of those very rare individuals who you gain instant respect for. Outside my father there is no man I respect more than Mr. Najarian.”

While coaching at West Junior High, he worked several summers for then Lexington High basketball coach Rollie Massimino. Massimino was so impressed with Najarian’s coaching skills that when he has offered the head-coaching job at Villanova University, Najarian was asked to become a member of his assistant coaching staff. Massimino went on to coach Villanova to the national championship with a memorable win over Georgetown in 1985 and gain instant national fame. However, once again the potential of fame and glory for Najarian paled in comparison to being able to help Watertown’s youth. So he refused the offer.

“I hear he has done a lot of good for a lot of people,” Massimino, who now is the head coach of Northwood University in Florida, said. “I want to congratulate him for his many years of outstanding service and his induction into the Watertown Hall of Fame.”

Najarian retired from the Watertown school system in 2001 but that hardly means he has been spending his days playing bingo and shuffleboard. Today, even in his mid 70’s he is more active than anyone working two jobs. Currently, he is working at Mass Bay Community College as an adjunct professor teaching courses in “Critical Thinking” and Psychology, supervises student teachers and teaching interns for Simmons College, is a consultant for a comprehensive wellness program called “New Beginnings” which assists youngsters and parents to the dangers of drugs and alcohol use, is a proud member of the Watertown Historical Society which recently secured a $700,00 grant to restore the Edmund Fowle House, which was the seat of the Continental Congress for a short time during the American Revolution, and even somehow finds time through all of that to host a Watertown cable television show called Watertown Sports Talk where he interviews local, as well as college and professional athletes.

“Through all the years I have known him and through all the people he has met, I have heard nothing but praise for this man,” Bean said. “I mean I don’t know any person who has anything negative to say about him. Maybe that’s because there isn’t any.”