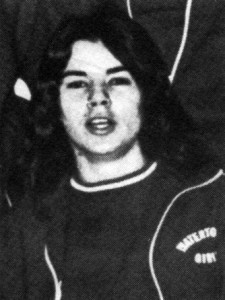 Maureen Ryan was a three-sport star at Watertown High. She graduated in 1975, having been captain of the softball team (she played varsity for three years), co-captain of the field hockey team, and co-captain of the very successful girls’ basketball team. Her hoops squads won two Middlesex League titles and went to the state tournament-the 1974 team being the first time any girls’ team had won a league championship in thirty-nine years. Maureen was the high scorer on the 1975 team as a senior, a team which went all the way to the state’s divisional quarterfinals. She swept the athletic awards given that year at the high school. She went on to Southern Connecticut State College and a distinguished academic and athletic career there.

Upon her college graduation in 1979 Maureen returned to Watertown and has given a lot of time to her community, especially through her work for the Watertown Multi-Service Center and at the Perkins School for the Blind. She also turned her attention to coaching, returning to Watertown High as an assistant coach in field hockey, basketball, and track, for some teams which have had notable recent successes. She is married, with three children.