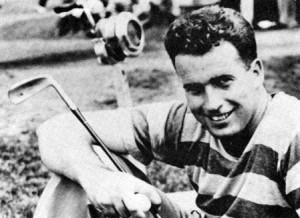 The story of Leo Martin is very much a family story, the story of brothers who loved each other and the game of golf. Leo and his twin brother Edward learned the game at a very early age when, together with older brother Randolph, they became caddies at the Waltham Country Club. All three brothers excelled; but it was Leo, by now a caddy at the Oakley Country Club, who broke away and in 1932 won the coveted Massachusetts Caddie Tournament. He did it with seeming ease breaking the tourney record and blowing away a field of over one hundred who were reduced to “looking on with mingled amazement and awe.” This “caddy champ,” noted the Globe, “has the earmarks of a star.”

And as Leo continued his career, he did not fall short of that promise. The next July, he made it to the semifinal round of the state junior tourney; and then, following Randolph’s example, Leo captained the Watertown High golf squad to the Greater Boston Interscholastic Championship. Leo and Eddie between them carried the day time and again; against Waltham High, the victory was ` `just a case of too much Martin . . .” At the same time the twins were playing four-ball for the Waltham Country Club, play ing brilliant golf and leading the team to the Bay State League title. “Congratulations to Watertown’s new stars,” commented the Globe after the twins teamed up to win a 1934 tournament at the Oakley, gaining statewide attention with their remarkable scores; indeed, the very next tourney proved the paper prophetic with another Martin victory in Auburndale.

Meanwhile Leo and Eddie were starring on the ice as well, as the starting defensemen for the Watertown hockey squad. Growing up near Walker’s Pond, the twins didn’t seem bothered by the change in surfaces or tools as they played “iron-man” roles. “The Martins need no subs on defense,” one reporter noted, as the Raiders went on to a successful Bay State League campaign.

After graduating from Watertown High, Leo and Eddie continued to golf, and continued to win. The pair became famous, asked to wear different sweaters on the course to help the gallery tell them apart. Leo’s play was enough to set him apart, though: in 1936, at age twenty-one, he was the runner-up in the state amateur tournament, losing by just one stroke on the seventeenth hole of the last round. Later that year, he teamed with Joe Stein to win the final amateur-professional event of the New England PGA season. And in 1937, both Leo and Ed qualified for the national amateur golf tourney in Portland, Oregon with a sparkling performance at Blue Hills. “Leo stood out with flamboyant sparkle,” wrote the Globe. “He drove, pitched, and putted like a champion and nothing else.”

And Leo was a champion. Over the next several years, he would win innumerable tournaments and prestigious honors, capping it off in 1940 by winning the New England amateur title at Manchester, New Hampshire. “Actually, there was never very much question about Martin’s superiority,” the Globe noted. “The strapping young twin from Trapelo romped.” And in 1941 he matched that form, taking the Massachusetts state amateur championship at Longmeadow Country Club, becoming the first to hold the state and New England amateur titles at the same time. “Since he won the state caddy championship at the age of fifteen,” the Herald commented, “Martin has established himself as the most successful amateur in the Bay State from the viewpoint of championship competition.”

But that was to be Leo’s last title. Upon the outbreak of hostilities, Leo enlisted with the Navy – and was named champion “for the duration” of the war by the Massachusetts Golf Association. But in March 1944, came some devastating news. Leo, a gunner on a merchant ship, was reported lost at sea.

Not just the sporting fraternity but the whole community mourned the loss. Leo was remembered as someone of average means who made it in a sport too often reserved for the well to do, “who came along the hard way and made a definite success of it . . . a success which reads something like a Horatio Alger or Frank Merriwell team.” He was remembered as a true sportsman, as someone who loved to win, but who knew how to lose graciously, who cared about family and neighborhood, who truly knew who he was and gave it all.

Leo was memorialized most movingly and tangibly in 1945, when the Riverside Golf Course in Weston was renamed in his honor as the Leo Jerome Martin Memorial Course. Yet in closing the words of Boston sportswriter Bob Coyne still resonate. Honoring all those local athletes who had given their lives in the war, he wrote: “Crossing the last white line/ they rise from blood-drenched sod/ to wend their soundless way/ to the playing fields of God.” The Hall can only nod in silence, proud, fifty years later to pay tribute in kind.