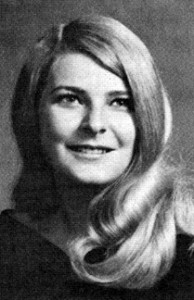 In the wake of the amazing recent success of local women’s teams – the 1994-95 UConn Huskies leap to mind, or, even closer to home, Watertown High’s own state championship field hockey squads – it is sometimes easy to forget that women’s sports have not always received the support they deserved. Paeans to male athletes, and athletics, are timeless; but female athletes have been long neglected. Special tribute, then, is due to those who helped to blaze a trail for equity.

Kathy Oates was clearly one of those pioneers. Graduating from Watertown High in 1965, she was captain of the basketball team; a softball standout; an outstanding gymnast, skier, and golfer; and even a member of the Riding Club. She participated in nearly every athletic opportunity offered by the Watertown Schools, and forced people to sit up and take notice. For her versatility was astonishing, as was the level of pure athletic ability and the work ethic she brought to each endeavor.

Rick Grant, a classmate of Kathy’s whom she joins in the Hall, puts it well. “Kathy was the most versatile female athlete of the 1960s,” he notes. “Gymnastics to golf, basketball and softball, whatever the sport, Kathy’s outstanding athletic ability and competitiveness propelled her to the very highest level of play.”

Kathy is now a special education teacher in the Hosmer School in Watertown. One comes away from a visit with her with not just the story of the best female athlete of 1965 but the story of an intense bond between father and daughter. Her father, John Oates, was an outstanding athlete in his own right (a member of WHS’s class of ’36) and was a lifetime teacher in the Watertown public schools, finishing his tenure as the longtime principal of the Cunniff School. He was an inspiration and a guide to Kathy; she remembers that his encouragement and support were crucial to her athletic development. Indeed, he began taking her to the golf course when she was nine – by the time she was twelve the pair had won the “Father-Son” tournament at the Oakley Country Club. The next year the tournament was renamed the “Father-Offspring” tourney – and Kathy and John won it again!

John was inspirational in another way, too. As a child, Kathy suffered from dyslexia – an affliction of which few had then heard which made learning, simple reading and writing, very difficult. Her father read to her every night, working tirelessly, never disappointed. As Kathy writes, “Any athlete can tell you about the many advantages that playing sports has brought to their lives . . . sports had another meaning for me. It was through sports that I was successful, I mattered, and I could contribute.”

Athletics fused into academics; and Kathy courageously applied the same ethic to the classroom that she did on the field. She prevailed, in 1969, becoming a teacher herself, helping her students overcome the same hurdles she had once traversed. It is a story of grace in gravity, of a happy ending that is all too rare. “I continued to study,” she notes, “and I continued to play sports.”

Kathy’s story is an inspirational one, for it highlights an individual making the absolute most out of the situation she faced. It is a story of family; it is a story of drive; it is, ultimately, a story of sportsmanship in its very best dimension. The female athletes of the 1990s owe a great debt to Kathy Oates and the other pioneers of female scholastic athletics; the Hall is honored this year to pay one small installment on that obligation.