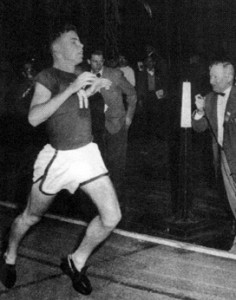 When Jim Kelly was about five years old, he learned an important lesson. He was on Priscilla Beach in Plymouth one July 4 holiday and was running in his first race – one his father Frank had organized, the finish marker literally a line in the sand. He pulled up ahead of the pack, seemingly victorious – and stopped right at the line. Someone passed him to win the race. And Jim never again forgot to run through the tape.

He would run through the tape frequently in the years to follow. He was a natural athlete, playing on the basketball and baseball teams at the Phillips School and the East Junior High, racing in the annual elementary and middle school track meets at Victory Field. He skated, he skied (though Coach Karl Clem induced him to stop for some years due to the injury risk), and perhaps as importantly, he went to as many Watertown High sporting events as his dad could fit in. He recalls the Cousineau and Oates football squads, and Shannon and Bradley owning the ice. And under the tutelage of his father himself the captain of the Boston College track team back in 1924, Jim learned the finer points of track and field while watching Ando Dadagian and the rest of Arthur Perkins’ great dynasty run towards history.

When Jim got to high school, Coach Bob Gleason recognized something special. As a sophomore, he came in third in the Class B state meet, helping the team to another state title. In the winter and spring Gleason trained him for the middle distances – 600 yards, the quarter mile and Jim stayed with those events all the way through college, while sticking with cross country each fall.

You could say Jim learned the middle distances rather well. He won four state championships in the two events mentioned: the 1955 and 1956 indoor titles in the 600 yards, and the outdoor titles those same years in the quarter mile. Indeed, he was undefeated in the 600 both of those years, setting a Metropolitan League record in ’56 at 1 :21 .4 (in college he’d shave some six seconds off that time in winning the District of Columbia AAU championship). He qualified for the National Scholastic Championships at Madison Square Garden in 1955 and 1956 and finished fifth in the country the latter year. Not surprisingly, he was named the team’s outstanding performer – and won the Boosters’ Club as the male athlete contributing most to WHS athletics overall in 1956. These were not just individual triumphs – the Watertown High track squad won state championships in cross country in 1953, 1954, 1955 (that year moving up from Class B to Class A); in indoor track in 1 954, 1955, and 1956; and in outdoor track in 1954, 1955, and 1956 as well. Those teams, not surprisingly, are also in the Hall of Fame as well, as is Coach Gleason. They were more than the sum of their parts in many ways. Yet few would have traded in the superb part that was Jim Kelly.

Adding the National Honor Society to his athletic achievements, upon graduating from Watertown High in 1956, Jim was awarded a full athletic scholarship to Georgetown University. There he continued to excel both on the track and in the classroom; his one-mile relay team was dubbed the “Wise Guys” for its academic stature, including Jim’s straight A, Dean’s List performance. The team earned honors in the gym, too. They competed against all the top teams in the east in a variety of prestigious settings from Boston Garden to the Penn Relays to a return engagement for Jim at Madison Square Garden. In 1959, they set a record in the VMI relays at Lexington, Virginia; came in second in the “Big 50 One Mile Relay” in the Penn Relays in Philadelphia; and placed at the National AAU Championships and the IC4A event in New York. In 1960 Jim graduated from Georgetown with an honors degree in philosophy.

Jim went on to Boston College Law School and to a career in law, specializing in real estate and probate matters. He served in the Army National Guard and later as a commissioned officer in the Naval Reserve J.A.G. Corps, reaching a rank of Lieutenant Commander. Jim and his wife of thirty-five years, Joan, have lived in Mansfield and Millis for most of that time; he served on the Mansfield School Committee for some five years. And he’s returned to the slopes.

It might be noted that Jim almost didn’t try out for cross-country back in the fall of 1953. He had wanted to play football instead; “my dad thought I was a little bit too small,” he recalls. Now Jim might well have become a champion back or blocker but somehow the Hall thinks that destiny was rightly served when he came to Bob Gleason’s attention instead. For his achievements have been anything but small; and for that, the Hall is proud to welcome him to its ranks this spring.