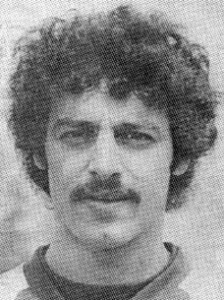 George Salvitti came to hockey late; he laced up his first pair of skates in ninth grade. Only they weren’t really his first pair, they were his dad’s. And they were a size and a half too big. And everyone else on the ice had been skating practically since birth, reflecting the New England hockey way of life. Somehow George had made it through the Coolidge and East Junior High Schools without having set foot on a rink.

But the very next year George was a varsity star. Two years after that he was team captain, Most Valuable Player, and a Middlesex League All Star. The hockey squad, which had a record of 2-16 when George was a freshman, turned that around by his senior season to rack up its best record~ in twenty years. Evidently he was a quick learner! Of course, there were some mitigating circumstances. One was the inspired tutelage of Coach Frank Cousineau and later Dick Umile, a credit George is only too happy to render. But others would have to include some talents inherent to George himself, his astounding natural athletic abilities and his gritty, energetic work ethic.

For, whatever sport he played, George excelled at it. The achievements above were but a single entry in an athletic career marked by excellence.

Take the baseball diamond, for example. Here at least, having played the sport since his Little League days, George had a head start! But the results were eerily alike; by his senior season, George was team captain, Most Valuable Player, and a Middlesex League All-Star. Teammate Mike Goyetche notes that his earliest memory of George is as a Little Leaguer, “with a first baseman’s mitt as big as his body. But somehow to see him as a graceful center fielder with a great bat was no surprise but rather a very natural evolution. He worked himself into a great and gutsy all-around athlete, one of the best of the era, as naturally talented and as smart a player as I ever saw.” His opponents had no reason to doubt it. George racked up a hefty .478 average in league play – close to a stunning .600 overall – to win the circuit batting crown and consensus All-Scholastic honors

On the soccer field, the broken record didn’t miss a beat as the team stayed competitive across a very tough league schedule. George was once again team captain, a Middlesex League All-Star, and the squad’s Most Valuable Player. Coach Phil Costello, who guided him in both soccer and baseball, told a local scribe that George was “a keeper. He has great instincts and great skills. I don’t know where we’d be without him.”

Not surprisingly, his senior year of 1976 saw George named “most athletic” by his peers and the winner of the prestigious Hoyt Thurber trophy as his class’ best athlete. He went on to Babson College on an athletic scholarship, majoring in marketing and finance. And his skills transferred nicely to the collegiate level. On the diamond, he clearly hadn’t lost his batting eye, as over four years he racked up a .346 average for his Babsor squads. He played four sparkling seasons of varsity hockey. And, most impressively, he helped pace his 1979-80 soccer team to the NCAA national: championship. In 1981, in recognition of yet another stellar season, he was named Babson’s “Athlete of the Year.”

After college George continued to excel, both as a marathoner and as an “iron man.” Among his other accomplishments he ran in five Boston Marathons in the 1980s, and twice in the New York marathon. He also began to enter triathlons, events that mix running, swimming, and cycling in a grueling combination, and attained a regional New England ranking. George went on to complete the World Ironman Triathlon in 1985, a contest requiring a 2I/z mile swim, one hundred and twelve miles on the bike, and a full 26-plus mile marathon to cap it all off. It was not for the fainthearted, but that is a trait of which George has never been accused.

George has remained active in and around the community. Most recently, wanting to give something back, George has made the move to the coaching box; for six seasons he has served as a bantam league coach in the Watertown Youth Hockey Association. “I’m loving it,” he reports. In part perhaps, that’s because he remembers his first steps on the ice: that they went from faltering stumbles to a smooth glide so quickly “thanks to Mr. Cousineau.”

It is interesting to think that, as George remembers, he took up sports way back when as a way to “fit in, to feel equal.” That modest goal was quickly surpassed; indeed, the irony is that he didn’t fit in – he stood out. Ever the class act, George took pains to thank, “from the bottom of my heart,” not just Frank Cousineau but all his other coaches along the way – “for giving me the opportunity to play.” We do have to figure, though, that from their point of view, letting George play couldn’t have been a tough call. Neither was the Hall’s induction decision.