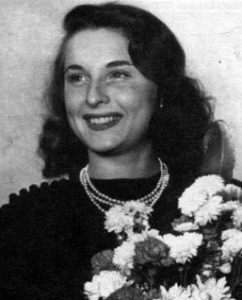 At a time when women athletes weren’t recognizable, Eva Frascatore was.

When Frascatore graduated from Watertown High in 1945, women’s sports were not held in nearly as high regard as men’s sports. These were the days before Title IX when women sports were considered after thoughts with brief four or five game schedules.

In Watertown, at that time there were also only three sports high school female students could choose from. One was basketball, one was field hockey, and one was tennis and all were coached by the same person (Sally Biggane). Frascatore, (now Eva McNutt) however, not only played all three sports but also played them all extremely well. Well enough to be voted the school’s best female athlete her senior year and now, well enough to be inducted into the Watertown High Hall of Fame on May 9.

“That is certainly where she belongs,” Don Costello, a fellow student from the class of 1945 who was voted the male’s best athlete his senior year said. “It is the right decision to put her in. I am glad her athleticism was noticed. She proved to be one of the best women athletes in all three of her sports. I remember her having such speed and knowledge of all the sports she played in and was very talented. But not only that she was one of the most popular people in the class. Everyone really liked her and appreciated her as a person. And may I add she was also one of the most attractive girls around too.”

Costello, in contrast to Frascatore, was one of the rare Watertown athletes to play in five sports during his high school career. He played baseball, football, hockey, basketball, and ran track before earning a nomination into the Watertown Hall of Fame as well. He remembers the boy’s sports getting nearly all the attention in his day and how unfair he thought it was. As well known as Frascatore was in their time, he said today would have been a much different story.

“Today she would definitely be one of the athletes you would constantly talk about,” Costello said. “She just had that natural athletic skill.”

The lack of attention in female sports back then didn’t stop Frascatore from having fun. She wasn’t the type of person who paid much mind to finding personal glory. She just wanted to simply be part of a team and enjoy the games she was participating in.

“I just absolutely loved, loved, loved, playing sports,” she said. “I was into sports 150%. I didn’t do badly in class but I wasn’t the best academic student either. Sports were my all. I remember Don telling me that I didn’t realize how good I was but I just got so much enjoyment just playing that I didn’t pay attention to that. I really hated graduating and when the time came I was really sad because I not only loved the sports but I loved the classmates. The class of ’45 was the best.”

Frascatore’s father (who moved the family from Italy to Watertown when she was three years old) was an athletically built strong man and may have been a reason why Eva was so naturally gifted. However, her mother didn’t want her daughter to take part in sports. At least at first.

“When she started seeing my name in the paper from playing she didn’t mind as much,” Frascatore said. “She loved that. But in the beginning she would say things like ‘women shouldn’t have muscles.’”

Such was the thinking back then that the rules of high school sports were adjusted to protect females. In basketball for instance while the boys were playing with the standard rules, the girls had to learn a new format. In their day only one individual from each team could participate in both the offensive and defensive zones. The other members on the floor had to strictly stay in either the offensive or defensive zone while also dealing with dribbling restrictions. However, it was in one of those bizarre games that Frascatore first became known as an exceptional athlete.

“I was a sophomore on the bench when the coach decided to put me on the first team,” Frascatore remembered. “I began shooting the ball and I ended up scoring 32 points. The ball just kept going in. One of the reasons I loved basketball is I thought shooting was so much fun.”

An individual scoring 32 points in one game in those days was pretty remarkable considering most female high school teams averaged less than that. It wasn’t basketball alone, though, that Frascatore exceeded at. She was captain and among the leading goal scorers as a field hockey player and was an exceptional tennis player. However, in those days once you finished high school athletics and you were a female, you were pretty much through with organized sports. Had Frascatore played in the present, she would have had a great shot at a college athletic scholarship but the pre Title IX days prevented that.

“Prior to 1972 when Title IX was put in affect a scholarship for a female athlete was pretty much non-existent,” former Watertown High athletic director Elaine Paradis said of the federal law that now requires boys and girls sports programs to have the same amount of money and opportunities. “Even when I was the head coach in girls basketball in the 1970’s I was making $200.00 a week while the boys coach made $800.00. Those female athletes in the 40’s 50’s and 60’s certainly had a difficult road.”

After graduating from high school, though, Frascatore stayed active. She continued to play tennis at such a high level that people tried to encourage her to go professional. She didn’t, however, want to pursue tennis, saying she just played for the love of the game. Frascatore also became noticeably good as a candlepin bowler where she consistently maintained an average over 100 and has a pretty impressive high single of 149. And if that wasn’t enough, Frascatore was even exceptional in archery as a three-year member of an archery club. (She would eventually quit the club because she didn’t have the heart to go deer hunting).

“I think I was just blessed with athletic ability,” she said. “I really believe I could have built a house.”

After high school, her non-athletic life was impressive as well. One of her many achievements was becoming a member of the Red Feather girls, an organization created during World War II which among their duties was visiting paralyzed veterans in the hospital. Today she is only one of a dozen of those girls remaining in the Boston area.

Frascatore also became a well known florist, worked for Attorney Paul Moriarity, who later became a judge, and shortly after graduating, put her high school aspirations of modeling to use as she became Miss Watertown as a 19-year old.

“It was because of the Miss Watertown title that I was able to become ‘Girl Friday’ at Filenes in Boston where I was working in modeling and sales,” Frascatore recalled. “I even got to meet people like Llana Turner and Bob Hope.”

Even today Frascatore remains as active and popular as ever. She is a member of the Hanover Historical Society, a 50 plus year member of the Sons of Italy, belongs to three garden clubs, draws and paints like a professional, and walks several miles a day.

“My four kids sometimes ask me why I have done so many things through the years and why I have so many hobbies, Frascatore said. “I tell them that before I leave this earth I wanted to do everything I had hoped to do growing up and I have. I will leave this earth with no regrets.”

Frascatore loved her class of 45 so much that she became a regular attendee of their high school reunion and it was at one of those gatherings where her principal told her something that she will never forget. It is something that makes her emotional to this day.

“The last thing Mr. Moody said to me was that the only reason he came to these reunions was to see me,” she said. “That school also made me feel loved. After graduation the family moved to Newton but I never wanted to leave Watertown. I loved it there.”

In the high school yearbook each graduate’s picture is accompanied with a saying created by the yearbook committee that best describes the individual. Next to Frascatore’s name is a saying that reads “Beauty and Wisdom are conjoined.”

The people who know her will tell you that description is still true today.