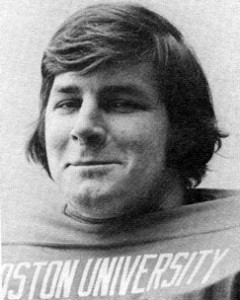 These days, Dom Lalli often finds himself talking to groups of all kinds at seminars and retreats. He likes to tell them about three telephone calls that had a huge impact on his life – each placed by the same man, Hall of Fame WHS coach John Barbati.

The first came as he entered his sophomore year at Watertown High, when Barbati asked him to join the football squad. Three years later, word came that Dom was to receive an athletic scholarship from Boston University. And four years after that, Barbati helped him into a coaching and teaching position at Xaverian Brothers High School, which kicked off a twenty-year career (so far) at that institution. Small wonder that when Dom returned to Watertown High in the mid-1980s to serve as line coach under Barbati, he did so with a real sense of giving back to the community that had already given him so much. He still pays tribute to “the spirit that Coach brought to each contest . . .. I continue to use the gifts he shared with me.”

Dom grew up in the East End of Watertown. He recalls that he started as a high jumper at the East Junior High, and was excited to clear the bar at 5’3″only to “retire” abruptly when Hall of Famer Billy Hatten easily jumped 5’10”! By the time he went to high school, Dom had moved to the discus and shot put, where his strength and focus made him a standout. His top shot-put throw was over 47 feet, topping off on the discus at a stellar 144 feet. Coach Bill Flecca remembers Dom as a “wonderful and dedicated athlete. Our outdoor team was led by the field unit and our championship discus squad – Dom, Greg Ohanian, and Mo Santoian, ail of whom consistently reached 140 feet and gold-medaled at the state coaches’ relay meet.”

The repeated use of words like “dedication” and “focus” is no accident, for they arise again and again when people discuss Dom’s career – and his life. Even now, he displays total determination as he works toward his goals; not, perhaps, the most naturally gifted athlete, he turned himself into a star through sheer force of will and effort. His skills were developed by trials and time, heart and hunger ardor and intensity.

At Watertown High, for example, he served as team MVP, as both an All-Scholastic defensive end (the starter in the 1972 Harry Agganis All-Star Game at that position) and as a dogged offensive machine. Dom was the blocking back who opened up space for some of the best running backs to have graced Victory Field, including Sylvio DiRico, Richard Morrill, and Ed Kasabian – and performed that role as well as anyone ever had. Kasabian, now a veteran Watertown police sergeant, recalls that “as the lead block, Dom would blast holes in the defense with his sheer physical talents and his heart. He was the leader, the guy who made things happen on the field”

A capstone moment to Dom’s high school years came in the 1971 Thanksgiving Game, when the Raiders buried Belmont, 28-6. The Watertown Press noted that “the senior blocking back . . . turned in his finest effort at the high school. A solid performer on defense he was the offensive workhorse who enabled [WHS runners to pick up considerable yardage with his crunching blocks, clearing the way into the end zone . . . our nominee for the outstanding player of the game.” For not only did he lead others to touchdowns, and add a variety of tackles and a sack, he also scored his first rushing touchdown – fittingly, on the last offensive possession of his high school career From the Marauder nine, Dom took the ball for a first down at the six . . . carried again to the three . . . then plunged in for the score. “There was no way they were going to stop me!” Dom notes. As teammate Joe Antonellis recalls, “the whole team was so happy for him. Dom was so excited he wouldn’t let the ball go. We had to pry it from him – we were afraid we were going to get a penalty!”

At Watertown High, Dom’s nickname was “Buffalo,” a moniker given to him by Leo Harrington in reference to his fierce charges, head down, during drills. That hard-hitting style continued as Dom – Now called “Rhino”! – went on to Boston University. And his success continued as well. He became a starter midway through his sophomore year and was consistently among team leaders in tackles. After being named to the All Yankee Conference second-team – part of a defensive wall that allowed just 12 points a game that season – he was named the BU squad’s co-captain his senior year Dom credits BU line coach Jim Lee Hunt, himself a former Patriots great, with bringing his game to a new level. Certainly the opposition agreed. Bob Norton, then assistant coach at UNH, remembers that “every offensive game plan against BU always started with a question: how are we going to contain Dom Lalli? We never did quite accomplish that. He was a force.”

Dom was leading the team in tackles his senior year, a projected first-team all-scholastic, when in the season’s fourth game he severely injured his knee. It was the end of his football career but it was the beginning of much else. During his high school years, Dom had begun to train in weightlifting under the direction of coach and mentor David Hughes, and that interest continued on in a variety of different competitive forums. At WHS he could already bench press 250 pounds; as a BU senior he benched over 400 pounds. In 1982 he won the Massachusetts State Bench-Press Championship, and was third in the New England competition; he won the state championship again in 1990. He also developed an interest in body-building, and won or placed in nine All-Natural Body-Building Conference championship in the late 1980s and early 1990s – including multiple turns as Mr. Massachusetts, Mr. Southern New England, and even, in 1990, Mr. USA in the tall man division. “It’s a question of discipline, and dedication to one’s goals,” Dom notes, and those are traits he has in spades.

Indeed, in his career as an educator at Xaverian – he now serves as its first Principal – Dom has brought those skills to new generations of students and athletes. The weight program he began there has contributed to the football squad’s multiple Super Bowl Championships in recent years. And, as importantly, his commitment to drug-free athleticism and a disciplined life has made him a mentor and role model for many young people. Dom speaks to a wide variety of groups; has been involved in Watertown youth sports, from Pop Warner football to Little League; and served for a decade as a youth minister at St. Jerome’s Church in Arlington, organizing activities and counseling. Quite appropriately he refers to his teaching as a “ministry” in its own right.

Dom likes to say that he still has a lot to learn; in fact he hopes to pursue a doctorate in education. But he has a lot to teach us, as well – about skill and will, about determination and faith. They are lessons the Hall is happy to take to heart.