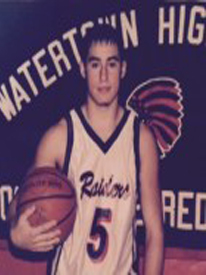 By the time Casey Brackett walked the graduation line at Victory Field in 2003, the point guard extraordinaire was a 2 time Herald All-Scholastic, a Globe All-Scholastic, a Middlesex League MVP, a two-time League all-star, and had added his name to the WHS record book by becoming the school’s all-time leader in assists and steals. The tireless worker and deft defender also possessed a killer shooting range and was fearless driving the lane, scoring over 900 points in his decorated career. Not bad for a kid who first strut his stuff as a youngster behind the Boys and Girls Club during time outs of the legendary Kaos vs. Control Watertown Recreation hoop battles. Hall of Fame Coach Steve Harrington told us “Casey had tremendous vision, and was constantly at least one thought ahead of everybody else.”

During Brackett’s junior and senior years, the Raiders were a combined 32-6 in the Middlesex League. For the 1st time in a long time, the town of Watertown had someone to root for in the postseason besides the field hockey team. The town fell in love with Casey and the Raiders’ defense first, up-tempo style of play.

As a senior, Brackett’s Raiders played at Lexington in the middle of the year on a Saturday afternoon. The game was sold out and Lexington was undefeated at the time. They had multiple future Division 1 college players on their team and their front line went 6’8, 6’7 and 6’6. Watertown was outsized by a ton, but they neutralized their height by using speed and quickness, and an ability to use the three-point line. Casey and his teammates made 14 three’s, and shocked everyone by thrashing Lexington 73-53. Brackett had 21 points, including 5 three’s, as well as 8 assists and 5 steals. On a team of talented athletes, Harrington cited Casey as “the ultimate leader who was always positive. He despised losing, and his overall attitude molded our team.” The anticipation of the next match up lasted for the next month as neither team lost during that time. The next game was at Watertown and the game was sold out again. The administration even brought extra stands into the gym to accommodate the large, overflow, standing room only crowd. Harrington remembered, “This had to be the largest crowd at any Watertown Basketball Game. Lexington prevailed 63 to 53 but the game was even closer throughout as Lexington pulled away in the last few minutes.” Brackett led Watertown with his typical line of 16 points, 9 assists and 6 steals.

As a senior Brackett and his teammates became the Division 3 North Champs for the 1st time in school history after a dominating 65-38 win over defending State Champs Lynn Tech, a team that featured Antonio Anderson, who would go on to play in the NCAA Final Four for Memphis and Coach John Calipari. Not since the glory days of the famed “Tech Tourney” team had the Raiders played at the historic Boston Garden. But Casey Brackett calmly grabbed the torch of Raider basketball passed on from fellow Hall of Famers such as Billy Hatten and Bobby Murgo, and led Harrington’s squad to the EMass finals. Ironically, this was a repeat trip for the Brackett family as Casey’s dad once played (and lost) on the famed parquet floor. Similar to his dad, that particular trek to the North Station landmark was unsuccessful, but Brackett helped set the bar that has become Watertown High hoops. And that bar is extremely high, including 19 consecutive trips to the post season, 6 D3 North Championships, and 2 State Championships.