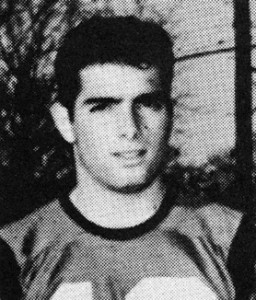 At Hurd Field that day two undefeated teams were looking for the Class A title. The crowd was estimated at 10,000 – but those there remember far more; and indeed, like Ted Williams’ last at-bat, everybody claims they were there.

The 1960 Red Raiders were a team of greatness. Hall of Famer Bob Cappadona was churning up the yards and running up the points all ear. But one should not overlook the contribution A1 Verrochi made to the squad – or to numerous other teams during his WHS career. He was both an offensive and defensive stalwart, a tough and scrappy player with legendary intensity. As Cappadona remembers, “he was one of the most dedicated players ever, one hundred percent in the game at all times. He was the one you wanted on the field through thick and thin: ‘ Coach Frank Cousineau concurs: ` `he was everything you would want in a football player. ‘

In Beverly that day, A1 took a pass from Ron Miggliaccio from the Raider thirty to the Beverly ten-yard line. Cappadona ran it to the four. And then, the 21-pitch. The fake was to Cappadona, but the pitch was to be to Verrochi. Everyone made their blocks – the defense was completely fooled – A1 had a clear shot to the end zone.

Yet in a play that is etched in the horrified memory of all who were there, the Raiders lost – by accident. The referee, too, had been fooled by the play, and ran in front of A1 to watch Cappadona run. The pitch hit him and bounced away; the ball was dead; the game was over.

The perfect season had been foiled – but the team’s greatness shone just as bright in defeat. It was the only game the Raiders lost that year. Indeed, the very next week, Al, playing with a concussion, rambled for 112 yards and fourteen points against Haverhill. As a token of Watertown’s appreciation for their performance, the citizens of the town sent the entire squad to the Orange Bowl in Miami.

Al’s stardom wasn’t limited to the gridiron. He played basketball as well, and shone on the baseball diamond under Coach George Yankowski. In one game his senior year A1 came up with two down and the bases loaded with the Raiders trailing by three. Three pitches later A1 cranked a monster shot over Brockton High School’s left field wall for an 8-7 victory. Teammate Bob Norton, sitting near the

Those skills were not just on offense; Norton remembers that Al was “as great a defensive baseball player as he was a football player – they’re on every play, the best fielder we had.” After his senior year in 1961, A1 was invited to try out for a Yankees’ farm squad; there, too, he hit a mammoth home run to win the game. In the end, he accepted a full football scholarship to Indiana University in the Big Ten and was a walk-on in their baseball camp as well.

Later transferring to the Franklin Institute in Boston, A1 received a degree in drafting. After a stint in the army, A1 became head foreman at a Lexington nursery and has worked there for over twenty-five years. He remembers his WHS years fondly – as he puts it, “it is not the honor of your accomplishments, it is the memory” that counts.

Watertown has a lot of great memories of A1 as well: as a leader off the field (he was president of his class for three years) and on, as a phenomenal athlete, as a man of class and integrity. With his well-deserved induction, the Hall is happy to add another memory to the file.