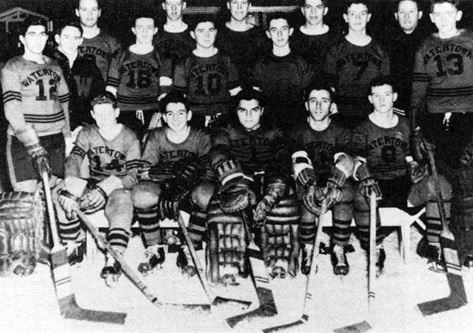 Entering a tough Bay State League race the Raiders had lost most of their experienced players, including two veterans in the opening weeks of the new season. But then, as goalie Henri Kasbarian recalls, “Coach Murphy began to spin his magic.”

After the season a Boston paper summed up Murphy’s thoughts: “I didn’t figure we had much of a chance!” Only classy center Arthur Shannon was a known factor. Murphy added, ` `our goalie was a sub last year . . . our first line wings were completely new. Our reserves were absolute newcomers – and not enough of them.”

In the end Murphy used an ` `Iron Six” starting line: center Shannon, forwards Ted Tocci and Fred LoChiatto, Jack Carey and Pete Hullihen on defense, and Kasbarian in goal. Dick White was the crucial seventh man, stepping in where needed to give the starters a rest. The first line logged around twenty-eight minutes out of a possible thirty every game; and all of Watertown’s goals during the regular season were scored by the iron six.

Hard work was part of the Murphy magic: practices were at 5:30 a.m., and Dick White vividly remembers catching the trolley to Brighton in those wee hours. Part was Murphy himself: Kasbarian remembers the skill with which Murphy made the needed personnel adjustments early in the season and remembers, too, that he was ` `a great guy, a great guy, somewhere between a father-figure and a big brother.” Team solidarity, and team spirit, were immense and intense.

The season opened with a solid shutout over Norwood; the latter, a local reporter noted, ‘ `might have done better with five defensemen and a goalie, so rare was it that the puck got over the Watertown line.” And the Raiders jumped into first place with a sharp win over defending champion Wellesley, with two goals from Shannon and a standout performance from Kasbarian, who “again showed he is one of the best schoolboy goalies of the year.” A follow-up whitewashing of Framingham had the papers calling, ` ` `Shut-out’ ” Kasbarian only slightly less than spectacular.”

And the season, too, followed that description. Only Waltham and Walpole were to mar the Raider record as the tight-fought Bay State League schedule continued. The starting six continued to excel. Kasbarian established himself as the best goalie in the league (allowing just nine goals in the first eight games), Shannon as a great stick-handler and the league’s top scorer for much of the year – as one local reporter noted, he “has stood out like snow on the campus grounds.” Hard efforts by “Flashy Freddy” LoChiatto, Hullihen (with “the hardest shot in the loop”), Carey (“capable of handling all comers” on defense), and Tocci (“fast-skating and heady”) rounded out a starting squad that combined a very able defense with constant scoring threats.

“We were a small team with almost no depth,” Shannon remembers. ` `There were six of us on the ice almost constantly.” But entering the Bay State League playoffs, the Raiders were in the hunt with Framingham and Walpole. In the opening game WHS got off to the right start, beating Boston College High School by a 5-1 tally, Shannon and Tocci scoring two apiece.

Framingham was next – for the title. The ` `Columbia Street brand of hockey” was poised for greatness, and it did not disappoint. LoChiatto scored twice and assisted a Tocci goal in the second period for a 3-0 lead. And appropriately enough, it was Art Shannon, playing hurt, which put the icing on the cake with a goal in the third, frosting a strong performance by Kasbarian. It was a 4-1 win and Watertown High School’s first hockey championship ever.

In the state tourney, the Raiders drew perennial Catholic League champions Malden Catholic, a squad regarded by many as the best team in the country. Through two periods WHS battled fiercely and earned a 2-2 tie; but in the end, MC’s depth was too much and the onslaught wore down the Raider defense. Malden Catholic went on to win the state and regional championships; the Raiders went home vanquished but not defeated.

For it had been a wonderful and historic season. Amazingly, all six of the WHS starters were named to the Bay State League All-Star team, a first in Massachusetts’s high school history. Shannon tied for the league-scoring crown; Kasbarian, a junior, was named the league’s best goaltender (a feat he would repeat his senior season.)

The 1948 squad had served notice that a surplus of heart and effort could overcome a lack of numbers; they had surprised everyone – except perhaps themselves – by grasping greatness.