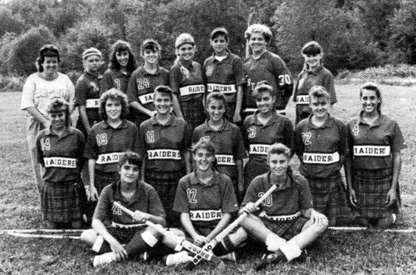 Some of them just didn’t know what it felt like to lose. The 1990 Watertown High field hockey team not only captured an incredible third straight state title but it contained a list of seniors who went four straight years in high school without ever walking away from a game on the losing end.

“Many members of the 1990 team were not only part of the three state titles in which we went undefeated,” Watertown Hall of Fame field hockey coach Eileen Donahue recalled. “But they were also members of the undefeated freshmen team that we had in 1987.”

When you look at that roster, the 1990 team can arguably be considered amongst the greatest array of talent the Watertown High field hockey program has ever had at one time. Although perhaps the greatest Raider field hockey player of all-time Cathy Guden had just graduated, there were still six Daily News Tribune All-Stars remaining on the squad of which three were also named Middlesex League All-Stars.

Among them was Watertown Hall of Famer and senior co-captain Lauren Khozozian who was named both a Boston Globe and Boston Herald All-Scholastic and dubbed the News Tribune’s MVP. Khozozian finished the season with 22 goals and 10 assists to lead the way. Her scoring talents however were just one of her many qualities that made her one of the top Raider field hockey players of all-time.

“Lauren was a strong player in many ways,” Donahue once said of the forward and leading scorer that season. “She had the toughness to not back down from anyone, the physical strength to overpower people, and the leadership to make others play at a higher level.”

Khozozian made sure the desire and determination she had to win games was passed on to her teammates. That’s why she felt preparing for games required just as much hard work as playing in them.

“This team really competed against each other in practice and sometimes they were really tough on one another,” Donahue remembered. “But as a coach you see it as a great thing when your players push each other like that. By doing that it allowed them in the end to create some wonderful memories for themselves.”

Other all-stars from that team included senior forward and fellow Watertown Hall of Famer Patty Grady (14 goals and six assists), senior tri-captain and halfback Meaghan Reilly, senior right-halfback Amy Guggina, who was always assigned to cover the opponent’s best offensive player, senior tri-captain and defenseman Laurel Manzelli, and junior goalie Kim Boyd, who at the end of the 1990 season had posted a career record of just 40-0-5.

In some of those games, though, Boyd didn’t have to break a sweat. Take the first game of the 1990 season when the Raiders began their quest for a third straight title with an easy 5-0 win over Winchester in which the visiting Sachems were held to zero shots. The local papers kidded that she could of done her homework in that game without anyone noticing.

Coming into the fall of 1990 the Raiders enjoyed the distinction of having back-to-back titles but with that also came the expectations of many of repeating while the squad had to also carry the burden of a remarkable 45- game unbeaten streak into the season.

That streak would amazingly continue throughout the entire year (not ending until 1991 when the Raiders lost to Melrose 2-1 eleven games into the season snapping a 77-game undefeated streak). Every time it seemed like that streak would end, the 1990 Raiders dug down deep and found a way to keep it going.

There were especially two occasions during the regular season that the Raiders streak looked for sure like it would come to a halt. Both came against Lexington, who ironically, would end up winning the Middlesex League title that year with a 16-1-1 mark despite another undefeated season (14-0-4) from the locals.

Early in the season with both teams at 5-0, the Raiders were trailing 2-0 at halftime against the Lady Minutemen but a furious rally was capped off when Rene Cetrone found the net off a pass from Khozozian to give Watertown a 3-2 come from behind win. That game also marked the first time in Iwo years Watertown trailed by as many as two goals. It was also the first time all season the Raiders, who only gave up six goals during the entire regular season, allowed the opposition to score.

The second scare came later in the season in their re-match at Lexington. With the Raiders riding a 59-game unbeaten streak and trailing 1-0 with less than a minute left, Reilly tallied off a free hit outside the circle with just 30 ticks remaining on the clock allowing the locals to escape with a 1-I tie.

“We showed a lot of character coming back like that,” Donahue was quoted at saying at the time. The word character would end up being used a lot by Donahue throughout the season to describe the 1990 team especially during the post-season.

When the Division Two tournament rolled around the Raiders knew they were the hunted but were determined to still play the role of the hunter. After earning a first round bye they opened up the tournament on the first day of November with a 3-0 victory over Triton. Khozozian would have two goals to lead the way.

Next up came a semi-final match-up against Wellesley in which the Raiders prevailed 2-1 setting up a memorable showdown with Manchester with the Division Two North title at stake.

That game was played on a bitter cold day in Reading and wasn’t decided until Khozozian’s overtime winner gave the locals a 1-0 victory and pushed them into the state semi-finals against Hopedale.

Once again the 1990 team with their backs against the wall found a way to persevere. Trailing 2-1 with less than three minutes left, Grady would tally twice allowing the team to play in their third straight state title game. Grady tied the game with 2:50 left before she converted a pass off the stick of Heidi Holmberg for the game winner with just 15 seconds remaining.

Perhaps Boyd, who made 15 saves in that victory summed it up best after the game when she told the scribes “This is what Watertown field hockey is all about. I’m so proud to be a part of this team. We just keep on hustling and scrapping.”

With the momentum of two dramatic wins behind them the Raiders traveled to Worcester to take on Bellingham for the Division Two state title. The Raiders once again played their best at crunch time leaving the field with 2-1 overtime win. Khozozian, who had so many key goals during that unforgettable season, fittingly ended her career with the game winner just 28 seconds into overtime to help the team capture their third straight state title.

“I just remember this team having so much composure and taking so much pride in their performance,” Donahue said recently. “They were much more concerned about the team as a whole and not individual play. That’s why we developed a saying of ‘teamness’ instead of ‘togetherness.’ This team had to face a lot of adversity all season long but this team had what it took to deal with it. They were all just very tough competitors.”

Had the Raiders not won the state title that year they still would have been the proud owners of two of their last three. There is a popular saying that says two out of three ain’t bad but you could not tell that to the 1990 Raider field hockey team.

Their remarkable determination and grit coupled with their refusable to lose make them an easy choice for the Watertown High Hall of Fame and an easy squad to recall when thinking back at some of the most memorable teams in Raider history.