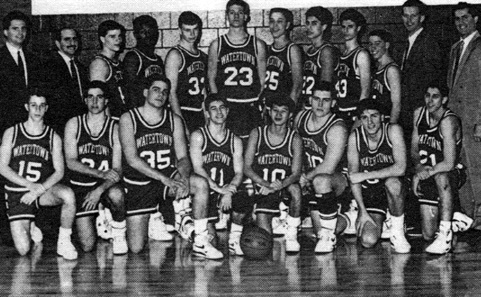 From 1987-88 to 1990-91, the Watertown High boys’ basketball squad appeared in four straight state tournaments, racking up a 63-23 record. While the single most dramatic win of that era was probably the Raiders’ defeat of Lexington in February 1988 – a squad ranked first in the state and in the top twenty-five nationally – it was the 1989-90 team that brought the program to new heights. The 1989 and 1990 Watertown Boys’ Red Raider Basketball team compiled a record of 19-3 and seized its first ever Middlesex League Championship, clinching it with a double overtime win over archrival Belmont. Along the way the team won the Kiwanis Holiday Tournament, and qualified for the state tournament for three consecutive years. Throughout the year the team was rated in the top ten in Division II, with its peak at number three at the end of the season.

The team was led by co-captains Thanh Pham and Nick Diodati, who provided a constant sense of leadership and direction, and kept the team focused on its goals. “It was a totally unselfish team,” said Co-Captain Red Raider point guard Nick Diodati. “Our team had great depth and attitude that carried us a long way.” Steve DeVito was the unsung hero of the team, playing up to four different positions, depending upon where he was needed. Ron Cerasulo, a transfer from St. Patrick’s, solidified the middle and always seemed to come up with the key rebound. Cary Drapeau’s long-range shooting kept things open down low for the good play of John Barry. Jason Curry provided a constant foundation of support and good work ethic. This was a total team effort. Other contributors were Malcolm Martin, a two-time All-Middlesex League player, and Craig Keefe. Nick, Malcolm and Craig Keefe received league-wide as well as statewide recognition for their outstanding effort and ability.

As good as this team was, the magic would have been lost without the efforts of Coach Craig Stockmal and his staff. Coach Stockmal is a Watertown High School Athletic Hall of Famer and a 1983 Boston College graduate. Coach Stockmal said, “We played the whole floor, we pressed the whole game and we used a lot of players and we didn’t care about individual statistics.” But most importantly, he said, “We had a great group of kids to work with.” Coach Stockmal credits his outstanding coaching staff, Jeff Corrigan, Jim Fitzgerald and Peter Centola for readying the team night in and night out.

“Hard Work” was the motto of the program for three years. It was evident that their “Hard Work” paid off. As the season drew to a close, the Globe caught on to the obvious, trumpeting, “Basketball is back at Watertown High.” The Hall is glad to be a little quicker on the uptake – and to welcome the 1989-90 squad to its ranks this year.