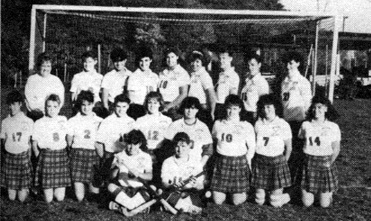 At the start of the Fall 1987 field hockey season, the members of the Watertown varsity were well aware of what they were not. Few players remained from the 1986 State Championship team.

They were also aware that in Fall 1987, the Raiders were the team everyone wanted to beat. “Repeat Not Going to Be Easy,” was the headline for the 1987 season preview published in the Daily News Tribune. The reporter, Tony Massarotti, quoted second year coach Eileen Donahue acknowledging that truth.

“We’ve never had a State Champion in field hockey and that was really something,” Donahue said to Massarotti. “That’s something that will always be a special memory. But [this year, 1987] is going to be hard. I realize that.”

Coach Donahue, the six returning varsity members and the other players on the Fall 1987 team only wanted a chance. A chance to be their best, on their own terms, and in their own way.

And now, the Fall 1987 Raiders Field Hockey Team joins Watertown High School Athletic Hall of Fame with the rest of the Class of 2006.

“The 1987 field hockey worked very hard, had a lot of fun, and were very competitive,” Coach Donahue said recently. “They challenged each other in practice throughout the season. These challenges helped the team have a very successful season.”

In the preseason, the Raiders had to deal with the typical challenges of a young untested team must – pushing themselves to reach greater and greater strength and stamina, learning the plays, understanding who on the team can do what well so that the team can win.

In the opening game of the season, Watertown trailed Woburn 1-0 at halftime. A team unaccustomed to playing losing field hockey faced the possibility of a loss in Game 1 of the 1987 season. After a halftime coaching session with Coach Donahue, losing was not so real a possibility after all.

“We weren’t the same team out there in the first half. We forgot what this team is about,” Coach Donahue said. “We just had to regroup at the half and get motivated. I told them to start believing in themselves.”

Eighty seconds into the second half, Watertown senior co-captain Lauren Hegarty blasted a game tying goal off a free pass by junior halfback Valerie Bayiates, one of nine shots on net for the Raiders in the final stanza, and, one of eleven corners in that game.

“We fell behind and we kept trying,” Coach Donahue proudly said after the game. “That’s an excellent feeling. They’re not going to quit.”

Quit was not in this team’s vocabulary. In its place was desire, the desire needed clobber Wakefield, 5-0, in the next game. Goals by Hegarty and junior Cathy Mastroianni put the Raiders ahead, 2-0, at the half, then three more scores by Hegarty, senior co-captain Julie Mandile and sophomore Joanna Rudaledige cinched the win.

As much as the offense was in synch, the Watertown defense was equally effective, denying opponents from the goal in the next four games: Winchester (2-0), Melrose (4-0), Burlington (5-0) and Reading (1-0). Keys to that defensive effort were halfbacks Bayiates, Hegarty and Andrea Colacito, fullbacks Kelly Khozozian (Hall of Fame Class of 2002) and Debbie Smith and senior goalie Marlene Demerdjian.

“Marlene stopped 14 shots for us (against Reading) including a couple of nice diving saves,” Coach Donahue said to the Daily News Tribune reporter. “It was really good to see her do well in an intense game, because now we can count on her in similar situations later in the year.”

After earning a tie against Stoneham and shutting out Lexington, the Raiders dropped their first game of the season, a 3-2 defeat to archrival Belmont. Watertown was 6-1-2 at this juncture, and had shut out six of those opponents, and outscored its foes by a 22 to 5 margin. But a loss to Belmont always feels worse than just one loss, and, Coach Donahue and the 1987 Raiders took a collective look in the mirror.

What they saw went deeper than a single loss, even to dreaded Belmont. They saw that they were a good team, having come together and played well in a short period of time. More importantly, they looked inside themselves and saw the desire to do better.

And that is what Watertown fans soon saw from the members of the 1987 team, who won its next six games in a row, five by shutout, to climb to 12 wins, one loss and three ties. The 6-0 run included a second victory over Melrose, the defending Middlesex League Champions, and concluded with a 1-0 triumph over Stoneham.

The run also saw the emergence of a prolific goal scorer, sophomore Cathy Guden (Cathy Guden Bailey, Hall of Fame Class of 2001). Thanks to some skills developed with Coach Donahue, such as flipping the ball over the goalie’s pads to the upper parts of the net, Guden would emerge as the leading scorer with 44 points at season’s end.

As much as she wanted to teach her players, Coach Donahue recognized that her captains were important to establishing the team’s work ethic.

“Lauren is a role model and a leader by example both on and off the field, who is always ready to help other players. She is a player who has really showed how much a player can improve with hard work.”

Mandile, who scored the game-winning goal in the 1986 State Championship game, was a constant reminder of Raider field hockey excellence every time she stepped on the field.

Given the chance, the 1987 Raiders proved that they could be successful field hockey players. And, when Watertown overpowered League rival Lexington, 4-1 in the 17th game of the season, the 1987 team did something that the 1986 State Champions never accomplished – winning a Middlesex League title.

Hegarty, Mandile, Guden, Mastroianni were important goal scorers yet, what pleased them and Coach Donahue even more was the development of the entire team.

“There was no letdown whatsoever when I sent in my subs,” Coach Donahue noted after a 5-0 victory over Burlington in Watertown’s late season surge. “The forward line of Joanna Rudaledige, Sandy LaVache, Nancy Clary, Amy Catarozulo and Valerie Ford kept the pressure on, while (Martina) Deanne, (Sarah) Kelley and Geralyn Finn played up to our usual high standards on defense.”

In the regular season finale, Belmont offered another gut-check moment for the 1987 Raiders, winning1-0, making Belmont the only team to defeat Watertown all year, and the Marauders did it twice.

The second loss to Belmont could have given the team a case of the butterflies in the playoff opener against Triton, but it did not seem to be that way. Instead, Watertown, despite an astronomical 26 saves by Triton keeper Lori Heywood, won 2-1, the game winner coming off a pass to Guden by Sophia Geragonis.

By this point in the season reporters wondered no more if the 1987 Raiders had enough players to be successful, especially after the Raiders proceeded to defeat Marblehead in the next round.

“The pool of talent that the Watertown field hockey team was able to draw upon was too deep for Marblehead to contend,” wrote the Daily News Tribune’s Bill Burke. “As a result, the Red Raiders eventually drowned the Headers by a score of 3-0.”

“You’ve just got to want it,” was Coach Donahue’s mantra with the 1987 Raiders, urging them to withstand an offensive onslaught by Lynnfield in the Division 2 North finals and prevail, 1-0, the 14th shutout with Demerdjian in goal.

Hegarty and Mandile stood in the middle of the field after the win over Lynnfield, the last one in the 1987 season once the Raiders lost to Quaboag in the State semis. Six of the players had experienced winning a Division 2 North Title the previous year, most had not, making this a special moment for a team that just need a chance, needed to put aside doubts about whether they were good enough, to make the drive to succeed their inspiration, not cynicism.

Several of the players of that field after the loss to Quaboag would enjoy the State Title that eluded the 1987 team. Those teams, like the 1986 team, have already been enshrined in the Watertown High Athletic Hall of Fame.

As so is the 1987 Raiders team, the team that showed how a Coach and a dedicated group of local women student-athletes, how to achieve success on their own terms, in their own unique way.