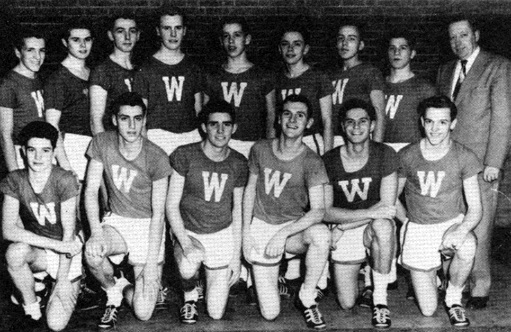 Now, that wasn’t a tough call. The Raider harriers had been together since sophomores, and had won consistently – almost automatically – for three years, indoor and out. Under the leadership of 1992 Hall inductee Coach Bob Gleason, the teams went five years in a row without a loss in dual meet competition. Three of the team members won state titles as sophomores, and added three more, plus a relay title, as juniors. Indeed, at the indoor state meet in 1957 the team amassed a record number of points en route to their second straight title. But the best was yet to come.

That afternoon in 1958, the phonograph needle skipped again: Watertown, Watertown, Watertown. With a dominant display of talent and grit, the Raiders won their third straight indoor title. The team scored in every event, winning five individual titles and adding a sixth in the relay.

Jay Luck – a 1992 Hall inductee – set a new state record in the 45-yard hurdles. David Harris took the shot put. Jim Gleeson took third in the 300 yards. Dick Bartley won the 600. Ron Young took the 1000. Jim Howley dueled to victory in the mile. The relay team (Luck, Young, Dan Igoe, and Bartley) capped the overwhelming victory going away. It was enough to move track legend Ralph Colson to note that this was the greatest team he had ever seen in his fifty-year association with the sport.

The team wasn’t done yet. Competing for the New England Championship, it won the Bowdoin Interscholastic. And at the National Championships in New York, Jay Luck won the hurdles for Watertown’s first national title as the two-mile relay squad of Dick Bartley, Vin Riccio, Jim Howley, and Ron Young finished fifth while setting a long-standing Massachusetts record with the best public school time in the country.

Moving outdoors, the team dominated again, with strengths in every event. Again, they took the state title. Joe Basile and Jim Gleeson handled the sprints and jumps; Jay Luck the hurdles; Dick Bartley, Ron Young, Vin Riccio, and Dan Igoe the middle distances; Jim Howley the mile; Bill Cavanaugh the javelin; Frank Arricale and David Harris the shot. The needle clicked, again, over and over And in the Penn Relays, against fifty of the top teams invited from across the nation, the two-mile relay team finished an impressive seventh. In three years, the members of the Class of ’58 had won nine team state championship meets, three state relay titles, and numerous individual glories, making their mark on a national level.

It takes something special to dominate a sport like track and field, for it is a team sport uniquely dependent on the performances of individuals. No single athlete can carry a squad – the team rises and falls as a team. Yet to note that this amazing crew of 1958 dominated the Massachusetts high school track scene is not only safe, it is inadequate. Part of that must be due to Coach Gleason, whose continuing success over his years at Watertown High bore testimony to his singular talent for shaping young athletes towards speed and grace, for bonding a cohesive unit that expected to win.

But that it did in fact win was due to the enormous talents of a lot of young men. Individual excellence compounded became a team – a team to go down in history.