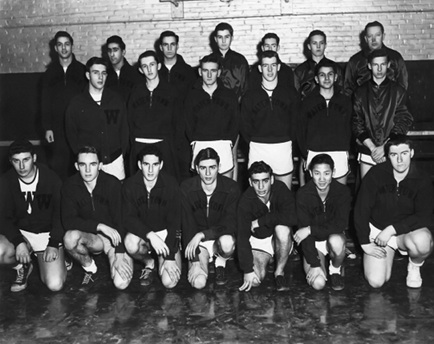 If in many ways Koko Gorgodian is overdue for induction, so is his signature team, the 1953 state champion football squad. This team, coached by Hall of Famer Joe Zeno, scared off most of its Class B competition after its state championship run in 1952. As a result the Raiders found their schedule packed with teams from Class A. Even so the squad lost just one game (against the Class A state champs, Newton).

Not surprisingly, the coaching staff – Zeno was helped by some first-rate assistants, John Mantenuto, Charles McGahan, Jim Sheehan, and Edwin Ward – was itself helped with some Hall of Fame help. Gorgodian, of course, but also Len Hill at quarterback, Ted Kelley at center, Lou Romanelli at left guard, Dick Berardino at left end, a young Paul Basile.

From Brockton to Brookline, the Raiders won in a walk. Opening day opponent Brockton, a Class A power, was defeated 20-0, the victim of Piantedosi, Gorgodian, and Frank Basile touchdowns. Class A Brookline likewise fell, 25-13. Rindge Tech, Malden Catholic, Cambridge – each game had a new hero, from Miller to Deldon to Hill to Mastrangelo, but the same outcome. “The Red and White roll”… “The Arsenal Towners crush”… “The Zenomen Run Through” – each week the headline writers strained for new blends of poetry to match the gridiron glory. The Thanksgiving game attracted close to 10,000 fans to Victory Field, and they were not disappointed. Watertown 31, Belmont 6. The Raiders were champions – again.

The 1953 team’s recapturing of its state crown was, the WHS yearbook claims, the first such title defense in Massachusetts Class B football. By any standard, it was an impressive achievement, the apex of Coach Zeno’s extraordinarily successful career at Watertown High. The Hall is happy indeed to welcome this group of achievers to its midst.