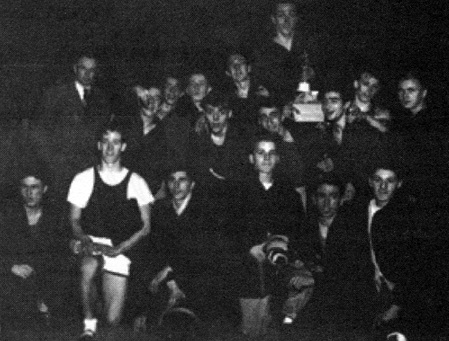 The rationale for this year’s induction of the 1947-1948 track and field teams into the Hall of Fame can be stated rather simply. Cross country, indoor, and outdoor track. All undefeated. All state champions. Yes, all of them.

But the story is worth a fuller telling. It begins with Hall of Fame Coach Arthur Perkins. After distinguished service in World War II, Perkins returned to his hometown, and in 1947 he introduced cross-country, then a largely collegiate sport, to Watertown High. It took his squad all of one year to win the state title. The squad swept its dual meets, including a victory over MIT’s freshman team. It then beat thirty-two teams, including strong favorite Melrose, in the state championship. In a true team effort, Jack Wathen, known alternately as “the Rocket,” and “Flash,” finished fourth overall, with Roland San Soucie fourteenth and three other WHS harriers in the top fifty. In the New England championship that followed, Wathen came in second overall.

The indoor track team was equally dominant, sweeping through the regular season; a highlight was handing Dedham its first dual meet loss in three years. The Raiders reigned triumphant at the Boston Garden by scoring in all but one event at the state championship meet. Wathen won the mile (having earlier set a new state indoor mark in the 1000 meters at 2:18.8). The high jump was won by not one but two from the WHS squad, Dallas Carlisle and Anthony Frascatore, who tied.

The outdoor team completed the sweep. Despite a lack of facilities, much of the team’s training took place by running through the second floor corridors of the high school, Perkins kept his men in tip-top shape. It might be noted, and not entirely facetiously, that the team faced its greatest obstacle that spring not from Arlington or Weymouth but from, well, dancing. The senior prom was scheduled for the night before the state championship meet. Perkins told the local paper, “NO, for a team of sophomores and juniors” and urged his “kids” to get enough sleep. Evidently, they did. Ronald Guittar hefted the shot put over 46 feet to win his event; sophomore Roy Lundgren took second in the low hurdles; Dallas Carlisle won the high jump; and Wathen set yet another record by winning the half-mile in under two minutes, coming in at 1:57.2.

And of course Perkins did have sophomores and juniors to complement his stellar seniors. Some individual performances have been noted above, and certainly Jack Wathen set the pace for the squad. But, as press reports of the time stress, the team won as a team. “The team won because its members were consistent point getters,” one reporter observed. Too many members of the squads won or placed throughout the season to list each triumph here. But it is worth calling the roll.

Indeed, Hall of Famer Dadagian, a sophomore on those teams, would later comment that “the 1948 teams were the seed for the dynasty that blossomed. Certainly the credit goes to Coach Perkins. As sophomores we got the confidence that comes from winning. Repeating excellence is a very hard thing to do, and this dynasty went from 1948 through 1958.”

Perhaps that was no real surprise. During the season, high-jumper Carlisle stressed “three fundamentals” for “a good trackman.” They were: first, a good coach; second, natural ability; and third, the will to win. The 1947-48 teams had all of those raw materials, in abundance. And in turning them into a recipe for greatness, they set the standard for a long time to come.