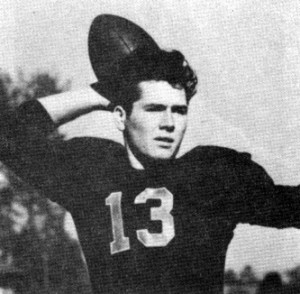 In the annals of Watertown High sports, Billy Boyce is an icon, his name often discussed in hushed tones approaching awe. Fiercely competitive and loaded with God-given talent, Boyce dominated the field of play in three sports during his high school years. Those who saw him play even in pick-up games down at Victory Field still marvel today at his speed, his strength, and his instincts.

Bill graduated from Watertown High in 1941, a member of various All-Scholastic teams including that named by the Boston Post. He went on to Boston College, where he joined WHS teammate Vic Palladino on Frank Leahy’s Eagles. There he was the first freshman in BC history to start at quarterback, throwing twelve touchdown passes en route to a very successful season as the team went all the way to the Orange Bowl against Alabama in 1943.

As World War II intensified, Bill joined the Army and served for the duration of the war while inducted he played in the Army’s baseball league and was selected for the All-Army Team, slugging .439 for the cause.

This served him well: upon leaving the Army in 1946, he signed with the Red Sox, and played in the Sox organization for some years at their affiliates from Louisville to Lynn. In the late 1940s, with the Scranton Red Sox in the thick of the AAA pennant race, Boyce’s teammate Jimmy Piersall was called up to the parent club. Boyce’s friend Ernie Mannino – a 1940 WHS grad who later became principal of the Coolidge School and now serves as the L’.S. State Department’s Director of the Office of Overseas Schools – remembers the story:

“The Red Sox had Ted Williams and Dom DiMaggio in their outfield back then, but needed another player Billy was tearing up the league down in Scranton; he having a terrific year and his team was on the verge of the championship. But when Boston called, the Scranton manager didn’t want to let Billy go, he was desperate to win the pennant and didn’t think he could do it without Billy. Instead, he sent up Piersall. But in my opinion and his manager’s! – Billy was the better player.”

Bill went on to play football with the Patterson Panthers of the American Professional League during the 1950s, but was forced to retire from professional sports due to a recurring heart condition. Luckily he and his wife (the former Jeanette Scanlon) have seven children; we doubt he had much trouble filling the time!

Mal Whitney, a fixture of Watertown politics and 1942 WHS graduate, recalls Bill as “just so friendly and jovial and generous – an all-around nice guy.”

The Hall can only agree.