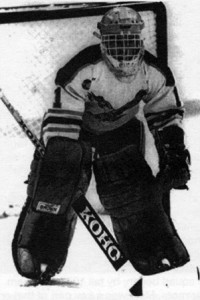 Shawn Real grew up dreaming of the heights, or rather of the Heights – a fan of Boston College sports since he was ten or so, he imagined himself one day sprawled on the ice in Chestnut Hill, making clutch saves in tournament games. “In goal… number one… Shawn Real…” said the voice in his head. “Save! What a save!” The best part is that the dream came true.

Shawn showed his hockey talent early, playing on Watertown Youth Hockey traveling teams as early as age six. He made the WHS varsity squad as a sophomore, and in 1982 was named team MVP and a Middlesex League All-Star. That ’82 squad reached the .500 mark, but the team wanted more. And in 1983, with Shawn in the nets and Hall of Famer Chris Vlachos providing the scoring punch, the team ran off a six-game unbeaten streak mid-season en route to a 12-4-2 mark. The last game of the season was, “ironically, the highlight of my high school career,” remembers Shawn – ironic, because the game ended in a tie – but a tie that lifted the Raiders into the state hockey tourney for the first time since 1948. Shawn was again a Middlesex League All-Star, team MVP (shared with Vlachos); he was a Boston Globe All-Scholastic and named a “first star” at Hockey Night in Boston.

But the team wasn’t done yet. The Raiders won their first game of the tournament against favored Gloucester rather handily. In the second round, Watertown took a 3-1 lead in the second period against perennial power St. John’s. The lead would slip away, despite Shawn’s astonishing 44 saves, but the Raiders had made their mark. Coach Dick Umile, who built the Raiders (and has now built UNH into perennial final four contenders), noted that “Shawn was one of the real keys in the resurrection of WHS hockey. He was a gifted goalie who had it all.”

Boston College took notice, giving Shawn a scholarship and the chance to play with such future NHL players as Kevin Stevens, Brian Leach, Craig Janney, Ken Hodge, and Tim Sweeney. He was a four-year varsity player with the Eagles, winning his first collegiate start against British Columbia in the Great Alaska Shootout in Anchorage. Spelling Scott Gordon, Shawn racked up a 10-5 record through his junior year, winning key conference games against New Hampshire and Wisconsin and starting the NCAA Final Four third-place game against Minnesota-Duluth as a sophomore. He was invited to play on a US Select Team against the Russian Spartek team in Troy, New York, in late 1986. As a senior, Shawn was the squad’s co-captain and won his first ten starts, racking up consecutive forty-save performances against archrival Boston University and winding up with a 16-3 won-lost mark, the best in Hockey East. The Eagles, ranked first in the nation much of the season, won the 1986-87 regular season and playoff Hockey East title as Shawn beat Maine 4-2 in the championship game. Shawn won the John “Snooks” Kelly Award that year as the “player who most typifies BC hockey.”

Dreams count. But so do talent and, especially, years of hard work. It is in recognition of Shawn’s personification of all those things that the Hall welcomes him to its ranks this year.