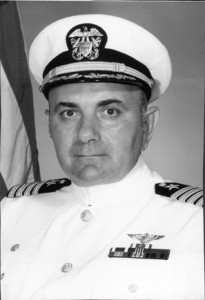 He has been gone more than a decade now but not a day goes by when those close to him don’t mention what a remarkable man he was. Ron Testa’s personality not only displayed courage, toughness, and determination but on the other side of the coin he also displayed honesty, kindness, and modesty.

“Ron never bragged,” his wife Julie, who married the 1958 Watertown High School graduate at the United States Naval Academy in Annapolis, Maryland in 1970, said. “I would have never known the high school scholarship/football facts without boxes of saved newspaper clippings.”

In high school Testa was talented enough to start as a sophomore at left tackle and it didn’t take long for head coach Vic Palladino to notice that he could be a special football player. Palladino was quoted as saying that Testa shows “a lot of promise” and those words not only proved to be right throughout his high school days but also later on at the Naval Academy where head coach Wayne Hardin called him “easily one of the better tackles in the nation.”

Football, though, was only a small part of Testa’s life story. The amount of amazing things he accomplished and the amount of respect and admiration he received throughout his 57 years on this earth both on and off athletic fields tells the real story of what an amazing person Testa was.

In his Navy tenure alone he was only one of a rare few who screened for three command tours.

A Navy aviator, who retired as a captain after serving as Deputy Chief of Legislative Affairs, Testa’s military assignments included service in Hawaii, Florida, Bermuda, and Washington. He was also in control of an air patrol squadron and his decorations included a Legion of Merit, a Meritorious Service Medal with two Gold Stars, and a Navy Commendation Medal.

“He even flew in Vietnam as bad as that war was,” his best friend growing up Dominic Antonellis said. “He was as brave and as tough as they come and somehow he always stayed well-mannered through it all. Obviously it’s an honor to have been one of his best friends.”

Testa’s life began on September 3, 1940 and growing up in Watertown got involved in sports as a young kid. He was one of the town’s Little Leaguers and also was part of a sixth grade football team. In those days they had intramural football competition between grammar schools.

“That’s when I became close to Ron,” Antonellis recalled. “I was playing for the Brown School and he was playing for Ron Marshall Spring. But you could tell right away he was going to be a very good football player. It was fun growing up with him. He was such a great person and I remember his parents being so kind to everyone. They used to take me down the Cape.”

Testa and Antonellis would eventually play together for Watertown High for three years together beginning in the fall of 1955 while both grew into pretty big young men. Testa was about 240 and Antonellis was about 270. It’s no wonder that during the three year run together the Red Raiders had a lot of success. Not more so than on Thanksgiving when Watertown simply dominated their Belmont rivals during that span. In 1955 Watertown defeated Belmont 46-8. One year later is was 20-6 and in their senior year they helped spark the Red Raiders to a 27-0 shutout win.

“The offense would either run the ball to my side on the right or Ron’s side on the left,” Antonellis, who would be co-captains with his best friend in the 1957 season, said. “They knew as big as we were they were going to gain some yards running behind us. But Ron was really quick for his size. He was a special player.”

Testa, though could not only add yardage to the offense but he was just as good taking away yards on defense. Palladino was quoted as calling Testa a “stalwart and a proven two-way player” who was “poison to opposing ball carriers” while complimenting the way he made “plenty of jarring tackles.”

As good as he was when he first joined the Raiders, Testa got better and better with each season. In the off season he joined the Watertown High track team participating in the shot-put which helped him gain even more strength. By the time he finished up his Red Raider football career Testa would receive honors like honorable mention for the Traveler’s All Scholastic football round-up, be named to the Suburban All-Stars, and be named an Italo-American All Scholastic.

Testa also excelled academically at Watertown High and was offered as many as seven four year scholarships including schools like Colgate, B.C., University of North Carolina, Syracuse, Brandeis, and the University of New Hampshire.

However, he decided to accept a one-year scholarship to the Naval Academy Prep School (amazingly scored a 690 in Math alone when it took an overall score of 450 to pass) called Bullis Prep in Silver Spring, Maryland. There he continued to play football alongside Antonellis once again dominating the line of scrimmage before they parted ways one year later with Antonellis going to Boston College and Testa continuing his Navy career in Annapolis.

Again, it didn’t take long for Testa to make an immediate impact with the Midshipmen football team. Testa would be the only tackle from his plebe (freshman) year good enough to earn a spot on the Navy varsity squad during football drills. Navy Director of Athletics, Rip Miller was so grateful to have Testa that he couldn’t wait to thank coach Palladino for recommending him.

“Thanks for bringing young Testa to the attention of the USNA,” Miller wrote. “We would appreciate any other’s of Testa’s caliber.”

Testa would go on to play offensive and defensive tackle for the Midshipmen and become a three-time letter winner between 1960 and 1962. Despite being the heaviest player on the team, Testa was also one of the quickest. It is no coincidence that with him on the line he would block for two Heisman trophy winners during his time on the squad. One time Watertown resident Joe Bellino won the Heisman Trophy in 1960 before future Dallas Cowboy Hall of Famer, who played with Testa in 1962, captured the award in 1963.

“He could run-straight ahead not zigging and zagging,” his roommate and Navy teammate Steve Hoy once said of Testa. “He could go like a race horse.”

As luck would have it Boston College was the first game on the Midshipmen’s schedule in 1960 where Testa, in his first varsity game with the Naval Academy, would unite with his Antonellis who was now playing for the Eagles. In that game Bellino would help lead the Midshipmen to a 22-7 win at Boston College.

Although an injury would limit some of his playing time in his sophomore season, 1960 would be a very memorable year for Testa. The Midshipmen would finish the regular season at 9-1 including a 14-7 win at Notre Dame and a 17-12 victory over rival Army. Their near perfect record earned the Midshipmen a spot in the Orange Bowl where they dropped a close 21-14 final to Missouri.

Despite the loss a short time after the game Bellino and Testa were among two of five Massachusetts varsity players invited over President elect John F. Kennedy’s home in Washington where they presented him with an Orange Bowl game ball.

In 1961despite losing Bellino to graduation Testa was one of the main reason’s the Midshipmen followed up their successful 1960 season with an outstanding campaign. In that season the Midshipmen went 7-3 but more importantly defeated Army once again 13-7 thanks in large part to the play of Navy’s junior left tackle.

The quote “Testa did more to ruin Army’s chances than any other enemy lineman,” appeared in the paper the next day.

After two full seasons of watching how good Testa was on the line, coach Hardin came out and said before the 1962 season that Testa should be one of the best tackles in the country this year. He was so impressed with Testa that he pushed him for All-American consideration and he was even mentioned in Sports Illustrated in their National College Preview issue as one to watch.

In that year Testa would cap off a great career in style aiding his team to a 34-14 win over Army. Testa would never play on a losing team at Navy and never be part of a loss to Army. Whether in high school against Belmont or in the Navy, Testa’s squads finished a perfect 6-0 in rivalry games.

“The bigger the game the better he played,” Antonellis said.

Testa was so good at Navy that the NFL’s Philadelphia Eagles gave him a tryout. However, after graduating from the Navy in 1963, he would spend two years coaching the plebe football teams before attending flight school to become a naval aviator in 1965, which led to assignment in the first squadron after completing the course.

From there he returned to the Naval Academy for duty as an instructor, athletic recruiter, and football assistant and it was during that time he met his future wife Julie. “The old saying that marriages have their ups and downs did not apply to us,” Julie said. “It did not seem like hard work to be happy with him.”

While stationed in Jacksonville, Florida Testa became a proud father of daughter Pamela. Although far away from home so often, he made sure he had one on one time with his only child.

From the time that she was very young when they started venturing on Saturday morning to the time they had father-daughter college visits, Testa stopped at nothing to spend all the time he could with Pamela.

Testa would also be extremely kind and considerate to total strangers. He kept old coats and sweaters in the trunk of his car to give to the homeless on the streets of Washington D.C.

“He also bought dozens and dozens of frozen turkeys for his church to give at Thanksgiving and Christmas with the stipulation that there would be no thank you or recognition,” his wife recalled. “Ron was my gentle giant who was a thoughtful and caring husband.”

With the captain status in tow, Testa retired from the Navy in 1990 where he would spend time golfing and collecting O gauge trains. He created such an incredible layout that collectors would come to his house to see what he had done and kids would come over to watch the show he would put on.

In 1998 Testa passed away suddenly leaving behind his wife, daughter and three grandchildren but also leaving behind memories that only a rare and special kind of human being can leave behind.