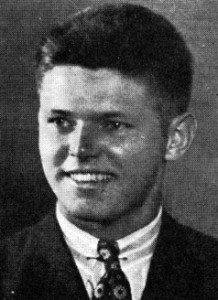 While Bob Dupuis is being inducted into the Hall of Fame this year for his magnificent athletic accomplishments, it’s fair to say that many Watertown residents remember him simply as “Coach.”

Indeed, Hall of Fame member Butch Raute speaks for a whole generation when he recalls his days under Coach Dupuis as a formative time in his life. “To this day I call him ‘Coach,’ ” Butch notes. “He was honest and sincere – his values stood out, strong and clear and meaningful. There were no stars on his teams; you worked hard and he worked with everyone as if their talents were equal. I tried to emulate him when I started coaching Little League and Pop Warner.”

As a player, Bob demanded – and received without question – the respect of his teammates and of his opponents. Hockey line mate Don Costello, a great athlete in his own right, describes him as one of the most impressive and physical players he ever saw. “He was a great skater with tremendous speed, a threat at both the offensive and defensive ends of the ice. I remember most vividly the sheer number of times he brought the crowd to its feet with a spectacular play.”

It’s little wonder, then, that Bob was a top choice as All-Scholastic and All-Bay State League in hockey. He was a baseball All Scholastic as well, a phenomenal pitcher – in his first high school start, he logged a three-hit shutout against Needham, striking out eight. John Degnan, long-time Watertown principal at the Coolidge and Cunniff schools, played the outfield behind Bob and recalls that he “simply overwhelmed the Suburban League. As for me,” Degnan adds, “I was so impressed that I even let him marry my sister!”

Graduating from WHS in 1944, Bob joined the Navy, and served until the end of the Second World War. With the return of peace, he continued his studies at Boston University, earning both a bachelor’s and master’s degrees in Education. He also continued to star in baseball and hockey. In baseball, Bob had the pleasure of playing with “Golden Greek” Harry Agganis. And it’s no coincidence that the Terriers showed some remarkable results at the rink during Bob’s tenure; his junior year BU made it to the national championship game, only to fall just short against Colorado College. The next year’s tournament was scarcely less successful, as BLI finished third in the nation. Watertown did more than its part: besides Bob’s inconsiderable contributions, WHS stars Joe Folino and standout goalie (and fellow Hall of Famer) Dick Bradley made their marks as well.

After graduating from BIl, Bob taught and coached at Rockport High School. In 1953, though, he jumped at the chance to return to Watertown as a teacher-coach. He coached basketball and baseball at the West Junior High School, was assistant football coach at WHS, and also served as the high school’s head hockey coach for many years. It will come as no surprise, given his reputation for fairness, that he became a referee and worked both high school and college games for more than twenty-five years until retiring several years ago.

Bob was always known as a strict enforcer of discipline, recalls Watertown’s Assistant Recreation Director, Marshall Bradstreet, but was revered as being consistent and just in its application. Self-discipline mattered, too. And “he took a personal interest in every kid he ever coached; he always cared, and that really came home to us,” he notes.

That fits, for Bob Dupuis is a man of honor and steadfastness. And while that may make him a member of the “old school,” those qualities are as timely now as they ever were. Bradstreet adds (with tongue in cheek) “it was his way or the highway. The thing is, we always liked his way.” Not surprisingly, so does the Hall.