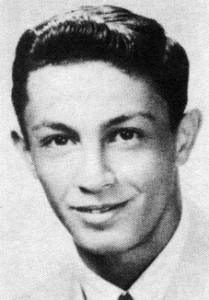 Paul “Scooter” Basile was a veritable Watertown High superstar. He played baseball (second base) and basketball (guard), and starred in them. He was named “best athlete” by his class. But it is as a football legend, with his trademark “waterbug” running style, that he will always be remembered in local lore.

In 1955, Paul led the state in scoring, with 137 points. His outstanding career is best summarized by its crowning achievement, an amazing performance on Thanksgiving Day, 1955, against Belmont. In a superhuman effort that looked effortless, he scored six touchdowns. It’s a feat that to our knowledge has never been duplicated, that has added a new dimension in individual effort to the traditional rivalry. After the season Paul was All-Everything, named to multiple all-scholastic teams. The Boston Globe raved that he was comparable to the great 1940s Army back Glen Davis of Davis-Blanchard fame. Impressive kudos, indeed.

Paul’s career was capped in 1956 when his number was the first to be retired by Watertown High. Later, Paul’s coach, Vic Palladino, mused that over his many years of coaching and observation of Watertown High football, the best two runners he ever saw were Paul Basile and Bob Cappadona. That comes as no surprise to the Hall.