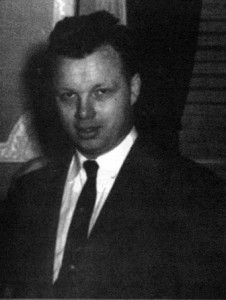 It is hard to go anywhere in Watertown without running across something Mal Whitney helped build or foster. After all, he=s been a leader in business circles, in the political arena, and in the fabric of the local community. He has served his neighbors in so many capacities that he might rightly be honored for any of them. The Hall is happy to pick one: his lifelong record of commitment to young people and youth athletics.

After graduating from Watertown High School in 1942, Mal entered the U.S. Navy and served aboard a destroyer escort, the U.S.S. Hilbert. He found himself at Tokyo Bay for the Japanese surrender in 1945, and was among the first group of American servicemen to set foot in Tokyo. Returning to Watertown after the war, Mal went into the insurance business. Already he was looking for ways to contribute; by 1952 he was president of the Watertown Boosters Club and soon got involved in state politics. In 1953 he became chief administrative aide to State Senate President Richard Furbush and state chair of the Massachusetts Council of Young Republican Clubs B and was elected to the first of ten terms on the Watertown Board of Assessors, a board he chaired for more than two decades. As time went on he was active in a wide array of state and county organizations dealing with assessment laws and property taxation, as well as taking leadership positions in every civic organization you can think of from the American Legion to the Elks to the Kiwanis. And, of course, in 1983 he was elected President of the new Watertown Town Council.

All this would seem to leave little free time. But throughout, Mal was working hard for Watertown youth and youth sports. He was a founding father of the Watertown Little League, as well as Babe Ruth and American Legion baseball. He was appointed by the Board of Selectmen to chair an advisory committee that led to the creation of the Watertown Recreation Department B and he served as that Department=s first chairman. He worked to petition Town Meeting to allow a new Boys Club to be built adjacent to Saltonstall Park, and helped raise $1.5 million for the construction. In the mid-1960s he served as president of the Boys and Girls Club and promoted the club=s golf and tennis tournaments under the leadership of Walter Munger and Paul Shakespear, respectively. The list could go on, and on.

As Bob Kaloosdian, attorney and member of the 1948 Hall of Fame track team, has commented, AMal has given just extraordinary service to the town of Watertown. He has given his total commitment to the community, and to our youth. Recreation Director Thomas Sullivan adds that Mal has been Involved in so many aspects of the town. His role was especially crucial in recreation matters B and in giving the children of Watertown a chance to play baseball.

In 2002, the playing field at the Lowell School was named in Mal=s honor. That fall, Mal=s long resume of service was honored by the Town Council with a reception and ceremony. But the Hall of Fame can think of no more appropriate honor than for Mal to join its ranks. His service represents the best of the athletic spirit: talent imbued with hard work, dedication melded with gentlemanly sportsmanship. Play ball!