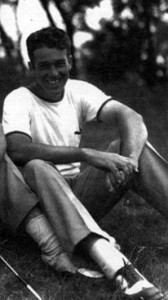 The story of Eddie Martin cannot be disentangled from that of his brother Leo, for theirs is a family T story, about brothers who loved each other and the game of golf.

Twin brothers, Eddie and Leo learned the game at a very early age when, together with older brother Randolph, they became caddies at the Waltham Country Club. Al) three brothers excelled. Randolph was captain of the Watertown High golf team; so was Leo. Leo and Eddie between them carried the day time and again; one local paper noted, after another victory, that the Raiders were “just a case of too much Martin…” The end result was the Greater Boston Interscholastic Championship. “Congratulations to Watertown’s new stars,” trumpeted the Boston Globe after the twins teamed up to win a 1934 MGA four-ball event at the Oakley, calling statewide attention to their remarkable scores; the very next tourney resulted in another dual-Martin victory in Auburndale. Sister Kathleen recalls that their mother thought this was all very nice – but not impressed that they had taken a day off from school to compete!

The consensus was that Leo was more purely talented, while Eddie was a more ferocious competitor but both traits were found, in spades, in both men. After all, Eddie and Leo were scrapping on the ice as well, as the starting defensemen for the WHS hockey team. Growing up near Walker s Pond, the twins didn’t seem bothered by the wintry shift in playing surface and tools. “The Martins need no subs on defense,” one reporter noted, as the Raiders went on to a successful Bay State League campaign.

After graduating from Watertown High, Eddie and Leo continued to golf, and continued to win. The pair became famous, asked to wear different sweaters on the course to help the gallery tell them apart. Their victory in 1937 at the best four-ball event in the country, The Jaques Cup at The Country Club in Brookline, solidified their lofty standing. That year both qualified for the national US amateur golf tourney in Portland, Oregon with sparkling rounds at Blue Hills. Indeed, Eddie would qualify four times between 1937 and 1941. In 1941 he finished second (in a tight 5-4 match) in the New England Amateur championships.

When World War II, both brothers enlisted – Leo in the Navy and Eddie, because of his eyesight, in the Army. Eddie served in Africa, with distinction; Leo was lost at sea in the North Atlantic in March 1943. In 1945, the Riverside Golf Links in Weston were renamed the Leo J. Martin Memorial Golf Course.

Eddie returned home after the war and returned to his job at the Middlesex Probate Court. And he returned to the links. “The magic and beauty of playing golf was never the same for him without sharing the glories with…Leo,” his sister Kathleen later said. But golf also helped heal the wounds. Son Eddie, Jr., noted that “occasionally [his father] would talk about a tournament they had played in, but not much. He was competitive on the golf course, and would get mad at a bad shot, but he was very friendly with people. He took turns playing with us in the Winchester Father-and-Son.”

Leo had won the 1941 Massachusetts Amateur Championship, and was “Champion for the Duration” of the war; in 1946 the trophy left the Martin house. Eddie made it his mission to get it back. In 1948 he did, beating Clarence Early at the Worcester Country Club to win the state title. The trophy returned to the Martin piano, next to Leo’s picture.

Three years later Eddie pulled off the rare feat of winning both the State Amateur and New England Amateur titles. He won The Country Club Cup, beating old family nemesis Ted Bishop. He qualified for another six US Amateur tournaments – once reaching the quarterfinals – and for several US Opens. As the Globe noted, “there wasn’t much doubt that Leo’s brother was one of the premier players around.”

Eddie died in 1990 at the age of 75. Watertown misses him, as does the game of golf. But one thing is certain-the reunion with Leo was surely a joyous one. And the Hall is happy to be able to reunite Eddie with his brother once again, here in their old hometown.