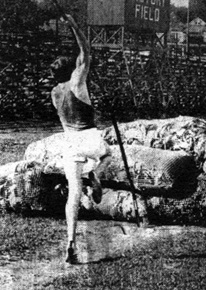 It is said that records were made to be broken. But in Conrad Watson’s case, that record has gone unheeded.

We would normally note that Watson was the premier schoolboy pole-vaulter of his era. But he has remained the premier schoolboy pole-vaulter, of every era since. In the more than three decades since Watson took seriously the call of Jimi Hendrix to “kiss the sky ” from 14-feet 6-inches up in it, his record has endured in the annals of high school track as if etched in stone instead of ink. In the opinion of many track aficionados, Watson’s 1969 ascent at Boston’s White Stadium may well remain the standard for vaulting excellence well into the new millennium.

While athletic accomplishments in many sports – say, football or baseball – are measured in minutes or even hours, the exertions of track athletes are often measured in seconds. It is in the prelude to these ephemeral efforts – in the long years of dreaming and striving, of training and practice – that we find the seeds that produced the fruits of victory.

In the case of Conrad Watson, that seed was planted early and nurtured by many. He was born into a track family where records and titles were common coin. His father John, was the Class B Middlesex champ in the 880-yard dash in 1937. His mother Muriel (WHS’38) played tennis and field hockey. Sister Cathy (WHS’74) and brother Walter (’76) were varsity athletes as well. And brothers Jack (WHS’61), Don (’62), Bob (’65, the first New England high school athlete to vault more than thirteen feet) AI (’67), and Richard (’70) all won, placed, or showed in statewide track and field championships during their years at Watertown High. Richard, in fact, had to settle for a rather respectable second when as a junior in 1969 he finished second to Conrad in the pole vault, reaching a height of 12 feet, 6 inches.

So there was plenty of inspiration in the Watson household to fuel Conrad’s track and field dreams. Conrad credits his father as his early motivation. His brothers served him well as track role models. He benefited from top-notch coaching from such mentors as Bill Jenkins, Larry Cafarella, and legendary Northeastern University coach Irwin Cohen. And at the national level, world-class pole-vaulters John Pennell and Bob Seagrem were his heroes.

His close relationship with his brother Richard, one year his junior was crucial. “I always thought of Rich and me as a team. We did everything together” including running on a relay team in Middlesex League dual meets. But if fraternal role modeling was a factor in Conrad’s track interest, so too was sibling rivalry. When Conrad broke an ankle his junior year he got unexpected motivation from a remark made by friend Nick Pappas, Jr. “You’ll never break your brother Bobby’s record now,” Pappas teased. Oh yes, he would, swore Conrad – and it was back to the pole-vaulting runway, bum ankle or no.

It was Coach Jenkins, he remembers, who started the track program at the town’s junior high schools. In high school, Cafarella – himself a Hall of Fame field athlete and then a teacher in the Watertown school system – brought Conrad under his wing. Cafarella took him to the Northeastern University track facility, where he was allowed to practice his vaults with the NU teams while Coach Cohen intervened with pointers on form and training. It’s one thing to be coached and another to listen, to learn. Conrad was the listening kind. He did not waste the lessons taught him nor the examples set, by family members and coaches. In 1968, while a junior at Bourne High School (where his dad served as principal), Conrad set the Capeway Conference record in the pole vault. Returning the next year to Watertown High, he kept breaking records – and then his own records. He became the first New England pole-vaulter to break the fourteen-foot barrier a record, as noted, that still stands. He was also a high jumper and ran the relay with brother Rich, Paul Airasian and Brian Igoe. Going on to Northeastern, he continued to excel. He was the pole vault champion of the prestigious Penn Relays and added the New England vaulting championship to his resume. Not surprisingly, he was a Greater Boston League all-star and All-New England to boot.

These days, Conrad is the owner and manager of a real estate development firm in Weston, having served as president of the Northeastern University Track Club among many other community endeavors. The Hall is proud to welcome him home.