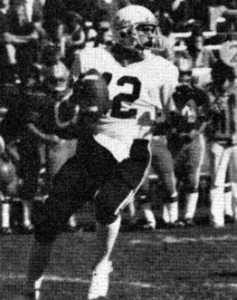 Going into the 1974 Thanksgiving game at Belmont, the host Marauders had not been beaten by Watertown at home since 1960. The crowd of 8,000 partisans smelled victory; Belmont was 8-1 and still in the hunt for a Superbowl bid. “Many Belmont fans feel that this team has yet to play its best game,” crowed the local paper.

But Watertown had some advantages as well. One was their quarterback. His name was Chuck Laurie, and even the Belmont paper had to admit he was “superlative.”

Chuck had become the starting quarterback his sophomore year when he leapt from third string to instant hero in a game against league champion Winchester, leading the Raiders to a shutout win with his pinpoint passing. The next year Watertown tied for the Middlesex League title, the school’s first. And entering the Belmont game in 1974, WHS had a 6-3 record, which guaranteed a winning year for the fourth straight season. The prior week Chuck had passed for three touchdowns against Wakefield as the Raider offense racked up 430 yards. The team was ready.

And, as a breathless Wizterto7vn Press later reported, “from the moment they won the coin toss the Raiders played like there was no tomorrow.” Belmont had allowed just seven points a game; the Raiders scored four times that en route to a 28-14 win, “one of the biggest upsets in the 54 year history of the football rivalry.” Many stars shone for Watertown; but Chuck’s offense owned the field, moving with ease through the previously impermeable Belmont backfield. With no hint of exaggeration, Kip Beach – a 1973 grad who had been on the receiving end of many Laurie passes – could report that it was the most exciting game he had ever witnessed.

Chuck graduated in 1975 as the team’s most valuable player. He had started twenty-one winning games, the most of any quarterback in WHS history. He had six varsity letters, three in football and three in basketball, where he also shone. He was on the Harry Agganis All-State All-Star team. He had offers from a host of collegiate football programs eager for his skills.

He chose to go to Bates to play under coach Vic Gatto, where he earned four varsity letters in football. Upon his graduation in 1979, he was the holder of five Bates passing records and was the captain and team MVP his senior year That year he also won the Gold Helmet Award of the New England College Football Writers as the Division III New England football player of the year. All in all, not a bad career.

Chuck has stayed in the Boston area; he now works for the Ryerson Steel and Aluminum Company. Those who saw him play and those who knew him off the field remember him with equal regard. “What can you say about Chuck Laurie? He’s what every father would want in a son,” notes longtime WHS faculty member Fred Parshley. And Chuck’s old coach, John Barbati, recalls him as “my quarterback and my leader, one of the best throwers who ever played for me.” But most of all? Well, says Barbati, “I just hope he’s the same as I remember him: ‘ He is.