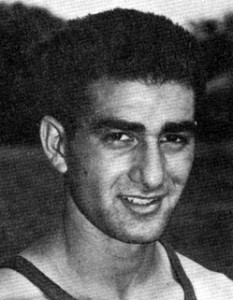 Wherever he competed, the newspapers covering the career of Andrew “Ando” Dadagian spent a lot of ne time thinking up superlatives. He was “a dream”; he was “a true star”; he was “the best the school has ever had.” Most tellingly, perhaps, he was “Automatic Andy.” For wherever he competed, at whatever level – he won.

As Coach Arthur Perkins remembers it, ` `no individual dominated the track and field world as did Andy. He could win any running or jumping event he competed in, a champion from the day he arrived from the East Junior High School: ‘ Indeed, an article from his high school career noted the track team’s injuries and asked, “With so many key men out of action, what is keeping the Perkins men from collapse?” The answer was not too, 11 surprising: Ando was at it again.

Andy is one of the greatest runners to have worn a Watertown uniform. In his junior and senior years he was eat the track team’s highest point scorer, setting new school records in the 300-, and 600-yard events – frequently by besting his own times. He was a gifted high jumper and anchored the state champ one-mile relay team. In the 1949-50 season the team won both the indoor and outdoor state championship, helped mightily by captain Ando’s state titles in the 440- and 600-yard events and the high jump.

After graduating from Watertown High in 1950, Andy went on to Wilbraham Academy for a year he both flourished both academically and athletically, a pacesetter both in the classroom and the gym. Named Wilbraham’s Most Outstanding Athlete (he lettered in soccer as well as track) and a campus leader, he capped a brilliant season by winning the 440-yard run event at the National Preparatory School Championships in Madison Square Garden in 1951. He also placed second in the broad jump as well, testament to his versatility – he was the highest individual scorer of the entire meet.

At Cornell the next fall, the headlines continued: “Dadagian Stars for Big Red”, “Dadagian A Cornell Hero,” “Dadagian Paces Track Squad: ‘ Ando compiled one of the most successful athletic careers in Cornell ~ted ~tory, rating as one of the top 400-meter hurdlers and 600-yard dash competitors in collegiate circles.

In fact, by his sophomore year Andy was already ranked on the global list for times in the 400-meters -just 2.2 seconds behind the top time in the world. He was the anchorman of the Cornell mile relay team, which won both the Ivy League Championship and the Penn Relay Championship for three consecutive years. As senior captain, he starred at the Heptagonal Games, helping Cornell win both indoor and outdoor titles – the last Big Red team to do so. He was selected to represent the U. S. at a series of European track meets – setting Ireland’s 440-yard hurdles record in 1954. Acclaimed in the Armenian community, he was named the Armenian Athlete of the Year in 1954 by the Armenian General Athletic Union.

Ando starred away from the field as well: he was the first captain of any varsity sport at Cornell to win the Woodford Oratorical Contest, when he spoke movingly about his experiences as a first-generation ~neruan-American. Upon graduation, he was accepted by the New York Medical College.

Giving up a shot at the Olympic Games to pursue a medical career, Ando has succeeded in that arena as well. He is now Chief of Otolaryngology – ears, nose, and throat – at St. Luke’s Hospital in New Bedford. “Automatic Andy” always was one to win any race he entered; some habits, it seems, die-hard.